Experts say face masks and other pollution related to COVID-19 measures are stressing the marine environment. 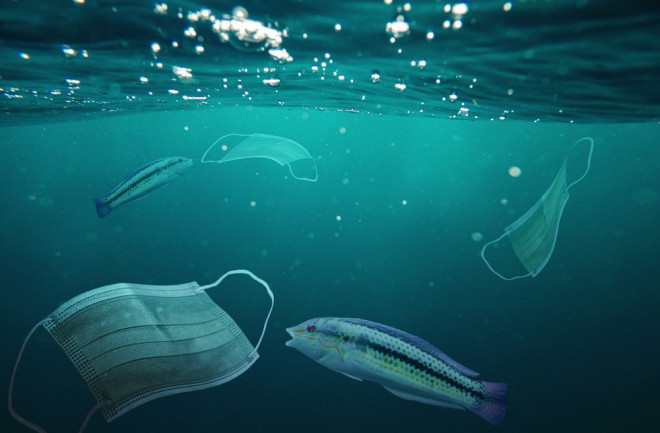 For decades, the world’s seas and shorelines have been strewn with plastic bottles, bags and other disposable debris. But over the past year, as humanity armed itself against the coronavirus, a new category of waste joined the scene: personal protective equipment.

In relieving a global health crisis, we have inadvertently worsened an ecological crisis. Since early 2020, the products meant to hold the virus at bay — face masks, gloves, hand sanitizer bottles — have washed up on beaches worldwide, and even on remote islands. “I’m astonished by how much I see when I take walks on the coast,” says Nick Mallos of Ocean Conservancy, who lives in Portland, Oregon. “I think the pandemic has absolutely underscored the importance of proper waste management around the world.”

Face masks have perhaps stirred the most anxiety, with recent studies estimating that as many as 1.6 billion could have entered the oceans last year. Each one weighs only a few grams, but collectively they amount to between 4,700 and 6,200 tons. Like many plastics, these polypropylene garments could linger for as much as 500 years before fully breaking down into microplastics, which are themselves more or less eternal. In all its forms, plastic poses a threat to the health of marine animals, and its effect on human health remains poorly understood.

The Second Life of Masks

One of the first organizations to raise alarm over pandemic pollution was Hong Kong-based OceansAsia, which surveyed the nearby uninhabited island of Soko and found 70 masks in a 300-foot span of beach. The situation has only worsened in the meantime, according to research director Teale Phelps Bondaroff. “Every single visit we find more masks,” he says, and with some masks now shredded and covered in algae, animals may be more likely to eat them.

Many people have noted that, to an underwater predator, floating masks may resemble jellyfish. And as Laurent Lombard, a diver and founder of the French nonprofit Operation Mer Propre (Operation Clean Sea), warned in a Facebook post last spring, “soon there may be more masks than jellyfish in the waters of the Mediterranean.” With their elastic straps, some fear the masks could entangle animals as well.

Of course, this recent influx is only a small fraction of total plastic pollution (some 11 million tons each year). “Face masks are the tip of the iceberg of this much bigger problem,” Phelps Bondaroff says. But he hopes they will draw attention to marine pollution in general, cutting through society’s “litter blindness” to jolt us into action. “If I’m walking out on the street and I see a cigarette butt, it kind of blends into the environment,” he says. But face masks, besides being the most salient cultural motif of our time, “are light, bright, and they stand out.”

Phelps Bondaroff also acknowledges the importance of personal protective equipment to prevent the spread of COVID-19. “Wear a mask,” he advises, “but wear a reusable mask unless absolutely necessary.” And when the situation truly calls for a disposable one? “Fair enough. If that’s the case, dispose of it correctly.”

The pandemic has influenced plastic consumption in less obvious ways, too. For one, as take-out replaced restaurant dining, disposable containers became the go-to vessels for many meals that wouldn’t have required plastic in the past. The plastics industry also seized the opportunity to push for reversals of the many plastic bag bans that have cut into its profits in recent years.

The CDC guidelines now state that airborne transmission is the greatest health risk, and that contact with infected surfaces is “not thought to be a common way that COVID-19 spreads.” But back in April, when studies found that the virus can survive up to three days on plastic surfaces, lobbyists leaped to pitch single-use bags as the hygienic alternative to reusable ones.

Read more about the plastic problem:

In late March, the president and CEO of the Plastics Industry Association wrote to the U.S. Department of Health and Human Services asking that it issue a statement promoting the “health and safety benefits” of single-use plastics. Over the ensuing weeks more trade groups and lawmakers called for rollbacks, and many succeeded. The United Kingdom, California, Maine and Washington, along with many other states and municipalities, paused their prohibitions.

“The initial setbacks were disappointing,” Mallos says, “but I don’t think we are seeing irreparable damage to the broader movement.” Many jurisdictions that suspended their bag bans last spring have since reinstated them, including California, and the wave of new policies continues to grow.

COVID-19’s most enduring effect on plastic use may even be positive, according to some optimists. By simply making pollution more visible, it could spur society to confront long-neglected questions about how to reduce and handle these products. “I think the pandemic has really signaled a larger truth,” Mallos says, “of just how much … plastic waste we produce, and how we manage it, and that this really matters.”

He, too, notes that the ultimate enemy is not PPE, but “the broader single-use mentality and plastics economy that right now is overwhelming our oceans and planet.” Most single-use items — from bags to eating utensils to food containers — have reusable counterparts, and Mallos urges people to make the sustainable switch whenever possible. Such actions may seem insignificant, he says, “but if a global population of 8 billion is making these small little changes, they really do add up.”

There is no shortage of creative ways to reduce plastic and ensure it ends up in the waste stream rather than in natural spaces, Phelps Bondaroff says. Besides bag bans, governments can raise littering fines and improve wayfinding for garbage and recycling bins. Individuals can pressure manufacturers to produce sustainable products with less packaging. In fact, he argues the problem is not a lack of innovation, only of motivation. “The solutions’s there,” he says. “We just really need to step up and tackle our addiction to plastic.”