Algae, plants and bacteria accumulate on ocean debris — emitting odors that cause turtles to confuse it for a tasty snack. 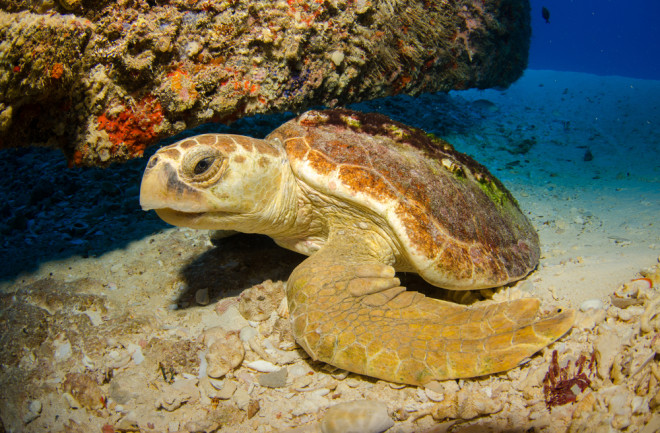 Sea turtles already struggled to survive before plastic debris showed up in their ocean habitats. On top of dodging predators from the minute they hatch, turtles now confuse bags and bottle caps for food — an attraction that often turns out to be fatal.

Biologists previously believed sea turtles swallowed plastic because it looks and moves like jellyfish or other nutritious snacks. New research suggests that the scent of bacteria and other microorganisms growing on ocean debris might lure turtles in, too. In other words: If it looks like food and smells like food, then turtles probably think it is food.

And if plastic trash collects in the ocean and releases enticing odors en masse, the overwhelming scent might be enough to lure in turtles from a distance, the authors suggest in their Current Biology report, published Monday. The deceiving smell could turn one of the turtle’s survival skills — following its nose — into a lethal threat.

It makes sense that sea turtles could confuse clear bags for jellyfish, though that theory doesn’t explain why turtles eat plastic of varying colors and consistencies. Maybe, the authors reasoned, the sea creatures also sniff out plastic with their noses.

Plastic fragments that bathe in the ocean long enough accumulate a coating of algae, bacteria and plants. A few years ago, researchers learned that these growing organisms release the same chemicals as the ones sea-dwelling animals follow to locate food.

So the research team brought 15 loggerhead turtles, all raised in captivity, into the lab. The biologists wafted four scents into tanks where each turtle was swimming. If the turtle poked its nose out of the water and inhaled, the team took that to mean that the turtle was interested — and likely would have tracked down the source of the smell had it been in the wild.

When the turtles smelled plain water or clean plastic, they only spent a few seconds with their nose in the air. But the scent of turtle food and plastic that had soaked in the ocean for five weeks had them sniffing for three times longer.

“The turtles know the smell of their food since they’ve been smelling and eating it in captivity for five months. I expected their responses to food to be stronger,” said University of Florida biologist and co-author Joseph Pfaller in a press release. “We were surprised that turtles responded to odors from biofouled plastic with the same intensity as their food.”

The team still doesn’t know exactly which smells emitted from ocean plastic attract sea turtles the most. It will be important to figure out which scents are responsible, the authors write, as more plastic accumulates in our oceans. After all, the turtles are just following their instincts: If the plastic smells good, they’re likely to eat it.