NOAA: Rest of the Hurricane Season Could be 'Very Active' 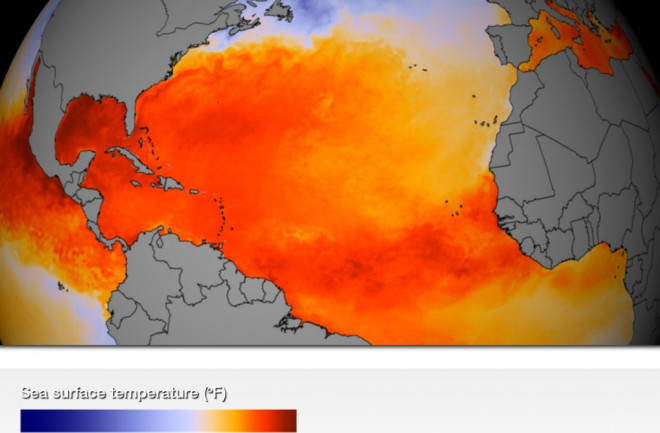 Sea surface temperatures in the Atlantic Ocean as measured by satellites on Aug. 8. Areas in yellow or orange are above 78 degrees F, which is sufficient for hurricanes to form. Click on the image for a larger version. (Image: NOAA Environmental Visualization Laboratory.) An above normal season is forecast for Atlantic hurricanes through October, and there's a possibility that it could prove to be "very active," according to the latest update from the National Oceanic and Atmospheric Administration, issued today. From the update:

The outlook indicates a 70% chance of an above-normal season, a 25% chance of a near-normal season, and only a 5% chance for a below-normal season . . . As predicted in May, atmospheric and oceanic anomalies across the tropical Atlantic Ocean and Caribbean Sea (called the Main Development Region, MDR) are now conducive to an above-normal Atlantic hurricane season. These conditions are expected to persist throughout the peak months (August-October) of the hurricane season in association with the tropical multi-decadal signal, which has contributed to the high activity era that began in 1995.

As part of the update, NOAA is estimating a 70 percent chance for each of the following for the entire 2013 Atlantic hurricane season:

That last bullet point is interesting. Accumulated Cyclone Energy is a measure that combines both the strength of storms and their duration. An ACE value above 120% of the 1980-to-2010 median is indicative of an above normal season. One above 165% percent means it is a very active, or "hyperactive" season. Given that the ACE value for this season could run as high as 190%, there is a "reasonable possibility" of a hyperactive season, NOAA says. Of course the number of storms isn't the only thing to be concerned about. How many are likely to make landfall is most important. NOAA does not issue formal forecasts about that in its seasonal updates. But this report does note that increasing seasonal activity does seem to raise the odds that a hurricane will make landfall in the region around the Caribbean sea and the United States. And during very active seasons, "the historical probabilities increase markedly for multiple hurricane strikes in these regions," NOAA's update report states. Of course, all it takes is one — as people living in the Caribbean and along the U.S. Eastern Seaboard learned from Hurricane Sandy last year. It turned out to be the largest Atlantic hurricane on record, and the second costliest Atlantic hurricane in history. High sea surface temperatures are among the oceanic anomalies that are conducive to formation of hurricanes. Warm ocean water provides the heat and water vapor that fuel the towering, intense thunderstorms around a hurricane's eye, where most of the storm's energy is derived. The graphic at the top of this post, based on data gathered by satellites today (Aug. 8), shows just how warm Atlantic surface waters are right now. Here's a graphic illustrating all of the atmospheric and oceanic conditions that presage more Atlantic hurricanes than usual for the rest of the season:

Diagram: NOAA Climate Prediction Center Interested in a recipe for making a hurricane? Check out this detailed one, with helpful graphics.