Nature vs Solar Power: Environmentalists Clash Over the Mojave Desert 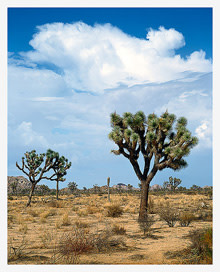 The Mojave Desert has become a battlefield for how President Obama’s clean energy goals should be moved forward, and conservationists and renewable energy advocates, usually natural allies, are now pitted against each other. California Senator Dianne Feinstein proposed legislation last week that would designate more than 800,000 acres of desert land a national monument, putting it off-limits to energy projects. The area of concern to Feinstein is between the Mojave National Preserve and Joshua Tree National Park.... The area includes desert tortoise habitat, wildlife corridors, cactus gardens and the Amboy Crater [Los Angeles Times]. While many believe that the desert is an ideal location to establish solar and wind farms, conservationists say that such projects would destroy the ecosystem. David Myers, head of the Wildlands Conservancy, says, "How can you say you’re going to blade off hundreds of thousands of acres of earth to preserve the Earth?" [The New York Times]. Myers stands firmly on one side, while other environmentalists are working with the state on its renewable energy plans for the desert. "We have to accept our responsibility that something that we have been advocating for decades is about to happen. My job is to make sure that it happens in an environmentally responsible way" [The New York Times], says Johanna Wald of the Natural Resources Defense Council. Feinstein, who regards the 1994 California Desert Protection Act as one of her proudest achievements, noted that the Wildlands Conservancy spent more than $40 million buying the former railroad land in the desert and turning it over to the government in one of the largest land purchases in California history, with the intent of protecting it. "I feel very strongly that the federal government must honor that commitment" [Los Angeles Times], she says. The Bureau of Land Management is currently reviewing 130 applications for solar and wind energy projects in more than 1 million acres of public California desert land, at least 19 of which have been suggested for placement in the territory concerned by the national monument legislation. There is particular urgency to the hunt for renewable-energy sites in California. A 2006 state law requires utilities to produce 20 percent of the California’s electricity from renewable sources by 2020.... Getting there will mean rapid construction of plants and power lines [New York Times]. Opponents of the Feinstein legislation see it as hypocritical. Says Republican Representative Doc Hastings: "If there is such strong support for renewable energy, then why are they moving to block renewable energy production in their own state?" ….[And California Governor Arnold] Schwarzenegger said in a speech last year at a Yale University climate-change conference: "If we cannot put solar power plants in the Mojave Desert, I don't know where the hell we can put it" [Los Angeles Times]. Related Content: 80beats: A Solar Power Plant in the Sahara Could Power All of Europe 80beats: Oil Cos. Buy Rights to Access Water Before Communities & Farmers