Oil Cos. Buy Rights to Access Water Before Communities & Farmers 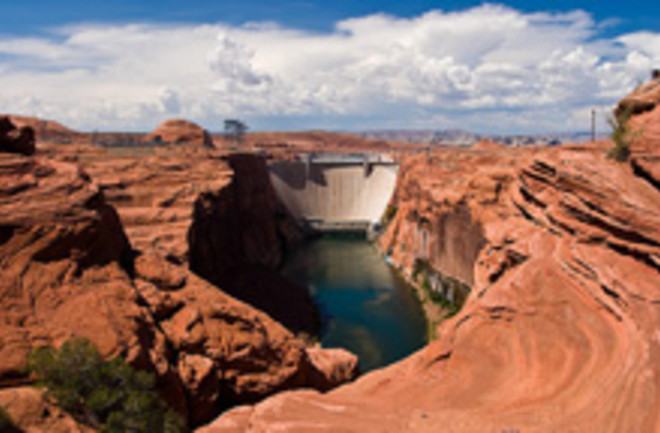 In preparation for future oil shale mining projects near the Rocky Mountains, six oil companies have gained rights to billions of gallons of water in the American West, potentially jeopardizing water supplies throughout the region, according to a new report by Western Resource Advocates [pdf], an environmental group. It is still preliminary to speculate on the implications of the findings, but many are concerned that if the companies put their rights to use, water will be shifted away from agriculture and community use. Using public records, the report examines more than 200 water rights held by six energy companies, including Shell and ExxonMobil, which, it is estimated, are collectively entitled to divert at least 6.5 billion gallons of water from rivers in western Colorado, as well as almost 2 million acre-feet of water from the state's reservoirs, which is enough to supply the Denver metro area for six years. Shale oil production is a water-intensive process: up to five barrels of water are consumed for every barrel of oil produced. This means that projects producing 1.55 million barrels of oil per day would require 378,000 acre-feet of water each year, compared to the Denver metro area’s consumption, which is less than 300,000 acre feet. Should oil shale production hit full stride in the next 15 to 20 years — something the White House under President George W. Bush tried to accelerate by opening up 2 million acres controlled by the Bureau of Land Management to leasing and approving royalty rates and leasing rules — there will be a major political battle over water rights [Colorado Independent]. Extracting oil from shale is still an experimental process, facing major technological, environmental and regulatory hurdles, and is considerably more expensive than conventional drilling [Wall Street Journal], and the report has reignited an ongoing public debate over what the impacts of oil shale mining will be on nearby communities and the environment. Last September, the mayors of 11 mountain communities in Colorado wrote a joint letter to publicly express concern about "significant impacts on our community infrastructure, environment, and quality of life" from the development of oil shale.... "There has also been little evaluation of the impact these technologies and processes will have on local communities or the regional air and water resources" [Environment News Service], they wrote. Shell spokesman Tracy Boyd defended the industry's strategy of preemptively buying up water rights, saying, "The rights that we have, for the most part, are conditional. The water has to be there legally and physically" [AP], adding that, "We're picking up properties as they become available or look strategic" [Wall Street Journal]. He tried to minimize cause for concern by saying that Shell expects not to need all that water for another 15 years, by which time it may have developed oil extraction methods that require less water. Colorado law allows river water to be used, at no cost, by any entity that can show the water will be put to a "beneficial" use. Extracting oil fits into that category, as does, for example, growing alfalfa, providing household drinking water and making snow at ski resorts. Oil companies can get water rights in two ways.... For a minimal filing fee, the companies have claimed scores of "junior" rights that allow them to draw water from a particular river after other users have satisfied their needs. The companies have also purchased dozens of "senior" rights from old-time farming families; those rights give them priority access to water, even in dry years [Wall Street Journal]. Related Content: 80beats: Violent Protesters Disrupt Conference on Preventing Conflicts Over Water 80beats: House Passes Compromise Offshore Drilling Bill, Makes No One Happy 80beats: California’s Water Management Threatens Salmon With Extinction DISCOVER: Anything Into Oil