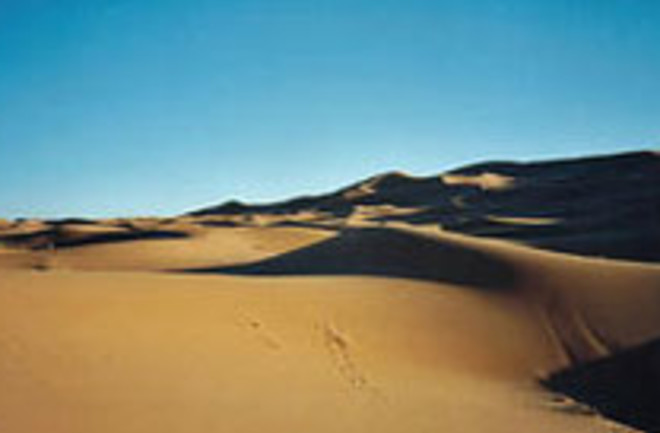 European Union officials say they're considering an ambitious plan to draw energy from the sun that beats down relentlessly on the Sahara. By building a solar power plant the size of Wales (a small area, compared to the vastness of the Sahara) and laying down high-voltage transmission cables, the EU could potentially capture enough clean energy to power the entire continent.

Speaking at the Euroscience Open Forum in Barcelona, Arnulf Jaeger-Walden of the European commission's Institute for Energy, said it would require the capture of just 0.3% of the light falling on the Sahara and Middle East deserts to meet all of Europe's energy needs [The Guardian].

It's more efficient to build such a system in the desert, officials say, because the intense sunlight of North Africa can produce three times more electricity than a similar set-up in Northern Europe.

The solar farms would produce electricity either through photovoltaic cells, or by concentrating the intense desert heat to boil water and drive turbines. This, along with power from other renewable sources, such as wind or geothermal, would be fed into a 5,000-mile electricity supergrid, stretching from Siberia to Morocco and Egypt to Iceland [Telegraph].

The plan comes with a high pricetag--the supergrid alone is estimated to cost $70 billion--but it would help the EU meet its target of reducing greenhouse gas emissions 20 percent by 2020.

This supergrid proposal has the support of British Prime Minister Gordon Brown and French President Nicholas Sarkozy, and supporters say the massive project would trump the unpredictability of the weather, which is often mentioned as a deterrent to relying on solar and wind energy. The wind would always be blowing somewhere, supporters say, and the sun shines on the Sahara pretty regularly.