Look at This: A Valley Painted Red with Algae 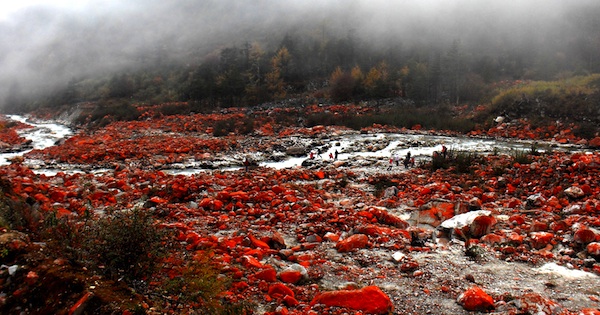 Carved into the northern slopes of China’s Mount Gongga, the Yaijiageng river valley looks like the site of a massive paint spill. But the red is actually all-natural: it is a massive bloom of a newly discovered variety of algae

, which is capable of growing on rocks and tree trunks. This yajiagengensis variety, named after the river valley where it originates, only grows on local exposed rock---and with debris and human activities blocking and rerouting the flow of the Yajiageng river in recent years, a lot more stone has become exposed. The alga’s spread has turned the location into a tourist attraction with the nickname “Red-Stone-Valley.” [via New Scientist