When wildfire smoke dissipates, we tend to forget all about it. But smoke stays in the air for long after, influencing the world around us. 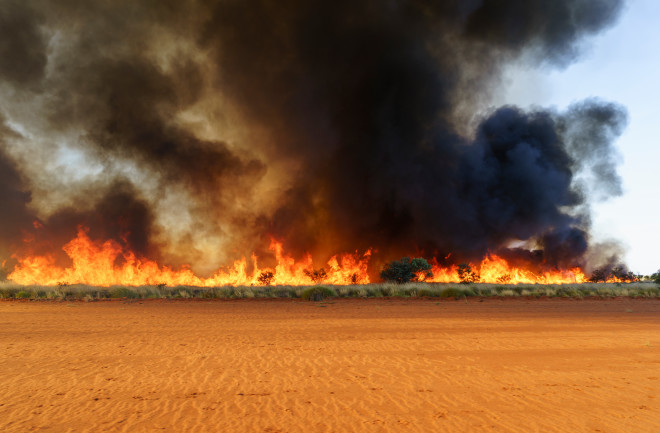 A bushfire in the Australian outback. (Credit: Bmphotographer/Shutterstock.com)

It was the smoke seen around the world. Billowing pillars of burned particles from Australia’s recent megafires sailed across the globe on high winds in the stratosphere. Closer to the ground, hazy clouds left the air difficult (and dangerous) to breathe for months.

The mobility and sheer volume of the smoke from these fires beg the question: What happens to all those particles and gases after the fires go out?

While we no longer see it from the ground or racing across satellite images, wildfire smoke can stick around for weeks at a time. Eventually, the components of that smoke will make their way back to Earth. Along the way, the diluted smoke will continue to scramble air quality and influence the climate in unusual ways.

How the Wind Blows

Where the particles and gases that comprise smoke end up after a fire depends on a few factors, says Bob Yokelson, an atmospheric chemist at the University of Montana. The first is weather. If it rains shortly after a fire, that smoke will have a very short journey. Many particles and gases in smoke are water-soluble and will be absorbed into clouds and rain droplets and carried back to Earth.

The second factor is size, says Yokelson. Bigger particles, like soil dust, ash, and microscopic charcoal, are heavy and often pulled quickly back to the surface by gravity. Smaller particles or organic aerosols, made either by complete combustion or chemical reactions between emitted gases, can make it farther across the globe as they are scattered by the winds.

On average, smoke particles linger in the atmosphere for up to two to three weeks, says Yokelson. In fact, while we tend not to think about smoke outside of major wildfire events, these particles are basically a constant in the air all year long, according to research by Karl Froyd and Greg Schill, scientists who study airborne particles at the University of Colorado Boulder.

In the atmosphere, smoke has several seemingly contradictory effects as it spreads and dissipates across the globe. “Smoke can do more than one thing,” says Yokelson.

The effects on human health are fairly obvious. “Large wildfires can cause decreased visibility and respiratory symptoms hundreds of miles away from the fire,” writes V. Faye McNeill, a chemical engineer who studies atmospheric chemistry at Columbia University, in an email to Discover. And as air quality plummets, the particles can embed deep within your lungs, with many possible negative health effects, says Mark Cochrane, a professor at the University of Maryland who studies wildfire, climate change and Earth systems.

As these particles are scattered by the winds, they have similar but more dilute effects, says Yokelson. If blown toward a major city, for example, the lower concentration of smoke particles can combine with existing pollution in that area to exacerbate poor air quality, he explains.

But some particles, like soot and black carbon, are dark in color and absorb light and heat. These particles can actually warm the atmosphere, reduce relative humidity and have a “cloud-burning effect,” says Yokelson.

Fires also produce invisible gases, including carbon dioxide. With some fires, the climate impact of this carbon dioxide could actually be minimal. For example, with many grassland fires in sub-Saharan Africa, the grass starts to grow back very quickly, reabsorbing the burned carbon dioxide almost immediately. But in situations where dense forest stands are disintegrated and replaced with agriculture, all that carbon will stay in the atmosphere, contributing to global climate change.

Eventually, whether it’s in one day or a full month, these smoke particles will fall back to Earth. Often, these particles contain nutrients like potassium and nitrogen from the plants that burned in the original fire, and can help fertilize the soil. If these particles settle on ice or snow, however, their darker color will cause them to accelerate melting of the white glacier or ice sheet around it.