As a Vast Swath of Australia Burns, the View From Space is Truly Frightening 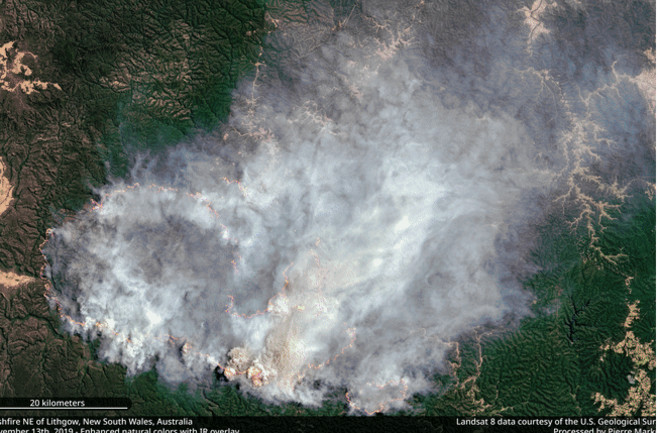 So far, Australia’s bushfires have scorched more than 4,000 square miles — an area greater than ten times the size of New York City.

With hot and dry conditions predicted for weeks to come, there’s not much relief in sight. And now, “catastrophic fire danger” is forecast for Western Australia on Sunday, Nov. 17.

The Australian bushfires have been so extensive and intense that pollution from the smoke has blown more than 6,000 miles across the Pacific to South America. Keep reading to see an animation tracking aerosols from the fires blowing across the Pacific Ocean.

But first, a personal perspective: In the many years I’ve used satellite imagery to illustrate stories about wildfires, I’ve rarely experienced anything more frightening than what I’m seeing now as a vast swath of Australia burns.

With that in mind, I thought I’d share a sampling of remote sensing imagery from different satellites.

The image at the top of this post is the most recent. It consists of a natural color view with an infrared overlay to show areas of burning. It was acquired by NASA’s Aqua satellite on Nov. 15, 2019, and processed by Pierre Markuse.

The bushfires are seen blazing across a 500 mile swath of New South Wales and Queensland. For a full resolution version, make sure to click on the image. That will take you to Pierre’s Flickr photo stream, where he has also posted other dramatic imagery.

Here’s a similar perspective, but in this case an animation of imagery captured by the Himawari-8 satellite.

The animation provides a clear indication of the high winds that have contributed to the rapid spread of multiple blazes.

This animation shows a sprawling bushfire northeast of Lithgow in New South Wales, Australia on Nov. 13th. Like the image at the top of the story, these were processed by Pierre Markuse, but this time with Landsat 8 data. I used them to create the animation.

One image shows the blaze in natural color. Once again, an infrared overlay allows us to see areas of active burning.

The other image in the animation is a false-color view showing more clearly the area scorched by flames.

For the following image, I wanted to show it all — billowing smoke, areas of active burning, and the scorched landscape:

I used the interactive Sentinel Hub EO Browser to create it using data from the Sentinel-2 satellite. (If you’re on a tablet or laptop, make sure to click on the image to get the full effect.)

Here’s a different kind of view entirely — one acquired at night:

The Suomi NPP satellite acquired this striking view of the fires raging in Queensland and New South Wales on Nov. 9, 2019. The data came from the “day-night band” on the satellite’s Visible Infrared Imaging Radiometer Suite.

This nighttime capability allows VIIRS to detect light in a range of wavelengths, ranging from green to the near-infrared. Filtering techniques are then used to observe city lights, auroras — and, in this case, wildfires.

Lastly, the animation I mentioned toward the top of this story:

This animation tracks aerosols from Australian bushfire smoke blowing across the Pacific Ocean. (Note: The left date in each image of the animation refers to data acquired west of the International Date Line, while the date on the right refers to data captured east of it. Source: NOAA/NASA via PhysOrg)

The animation tracks smoke blowing across the Pacific Ocean. Based on data from the Suomi NPP satellite’s OMPS instrument, it shows the progress of aerosols within the smoke between Nov. 8 and 13, 2019.

Summer has not even begun Down Under, so the worst of the heat and aridity may still be coming.