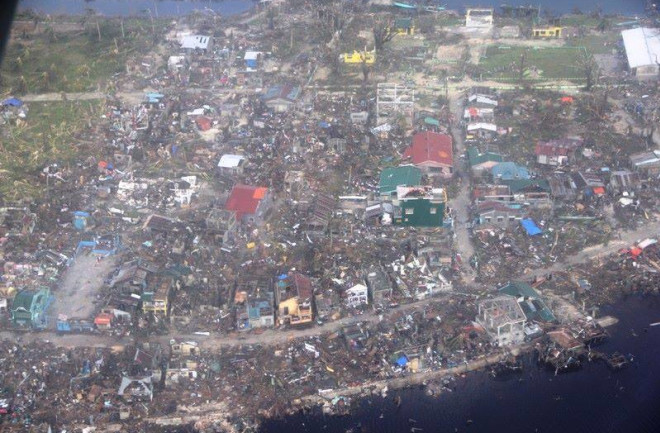 Aerial photo of the devastation wrought by Super Typhoon Haiyan in the Philippine city of Tacloban. The photo was taken by a crew member on an Armed Forces of the Philippines aircraft flying over the city. For more, see the AFP Central Command Facebook page. | Update 5:30 p.m. MST, 11/12: After I took my friend Keith Kloor to task in the post below, another friend and colleague has taken me to task for not including the most important factor in what drove the specific catastrophe wrought by Haiyan in the Philippines: the social and economic dimensions. See the bottom of this post, where I correct that omission. It's an important point, so please make sure to check it out.| Keith Kloor, a friend and fellow blogger here at Discover, has a provocative post up today titled "The New Normal: Climate Ambulance Chasing." Speaking of catastrophes like Super Typhoon Haiyan, Keith writes:

...you can be sure that trailing behind these disasters, like ambulance chasers, is a brigade of climate-concerned activists, scientists and their enablers in the media. And trailing behind them is an Anthony Watts/Marc Morano led brigade of chortling denialists, whose main objective is to exploit, for ideological/political purposes, the exploitation of disasters by the climate ambulance chasers.

In the post, he takes journalists to task for bringing up the climatic context of storms like Haiyan. Since I've discussed the climatic context of recent extreme weather events here at ImaGeo, I thought it would be a good idea to respond to Keith. So here goes... Dear Keith, Whether you like it or not, the climatic context of Super Typhoon Haiyan IS front and center in the news coming out of the U.N. climate talks in Poland, and both activists and skeptics are making all manner of claims in the aftermath of the typhoon. So I believe science and environmental journalists have a responsibility at least to try to hold up these claims to scrutiny, and to let readers know what can be said with confidence, what's at the cutting edge of science, and what is simply bogus. That is not being an "enabler" of "climate ambulance chasers." It is simply doing our job. With this in mind, here are my abbreviated answers to those questions, starting first with a summary and then delving into the geeky details: It is absolutely true that we should tread very carefully in linking individual storms to climate change. As you point out, this is the province of a field called attribution research. Although this is cutting edge stuff, and thus subject to doubt and uncertainties, scientists have been making progress in their ability to determine the degree to which, if any, climate change may have contributed to an extreme weather event. But that attribution research hasn't been done for Super Typhoon Haiyan. That said, it is perfectly legitimate to point out that while no trend in cyclone activity attributable to climate change has been definitively documented for the globe as a whole, there is evidence for one in the North Atlantic — associated with warming ocean temperatures. Moreover there's reason to believe that sea level rise can exacerbate storm surges to some degree. But in the case of Haiyan, the surge was so high that any contribution from sea level rise was likely to have been small. Lastly, recent research suggests that as the world warms, both the number and intensity of tropical cyclones may increase, although this too is cutting edge research with uncertainties attached to it. I think that is a pretty fair "nut section," if you will, summarizing what can be said about the climatic context of tropical cyclones. And now, here are the geekier details:

Hurricanes operate off a difference between the temperature of the ocean and the temperature of the atmosphere. And as we add greenhouse gases to atmosphere, that temperature difference increases. And that tends to make hurricanes more powerful. That hurricane power during the period of really good observations, from about 1980 until now, has roughly doubled in the Atlantic. That's a big signal. Now the question is, why has that happened? And the fact that it is so beautifully correlated to sea surface temperature gives us a little bit of a leg up, because it's easier to ask why the sea surface temperature has gone up.

Seas have been rising significantly faster in the Philippine Sea, where Haiyan struck, than the world on average. The higher seas would have worsened flooding, just as sea-level rise amplified the damage from Superstorm Sandy, but given the fact that Haiyan’s storm surges were as much as 20 ft., climate-driven sea-level rise wouldn’t have been the deciding factor in the supertyphoon’s devastation.

Keith, I agree with you that using a calamity like Super Typhoon Haiyan as just another excuse to trade salvos in the climate change wars is unseemly, at best. I made that very case two days ago in a post here. But when claims are flying around, it is the job of journalists to try to call balls and strikes, and present a clear and accurate picture of what science can say. Even umpires make the wrong call sometimes. So I may have erred in some of what I've said. If I have, I'll correct the record. In the meantime, I remain... Your friend and colleague, Tom |Update: This post was intended simply as a refutation of the claim that journalists who bring up the climate context of extreme weather are somehow enablers of "ambulance chasers." I strongly believe that one of our roles is to call balls and strikes when activists, skeptics and others get attention with their claims. But that's certainly not our only role. We obviously need to put a storm like Haiyan in its full context, and climate is just part of that. With this post, I did not at all mean to imply that the climate science context is preeminent in the Haiyan story. Far from it. What happened is this: A huge and powerful storm bore down on a densely populated coastline, where poverty and shoddy construction abound. And even a weaker storm would have caused a great deal of misery. Seth Borenstein of the Associated Press got the balance just right in his story today. You can find it here. |