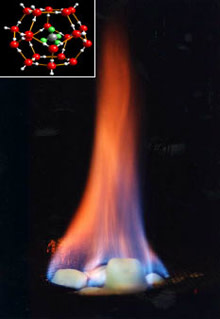 doesn't have much oil, leaving the island nation heavily depended upon imports. What it does have, though, is natural gas—far under the sea in methane hydrate formations. The country said this week that it is going after those deposits, drilling test wells next year with the intention of beginning extraction before the decade is out.

What makes methane hydrate unique is that it is a seemingly frozen and yet flammable material. Formed in cold, high-pressure environments, it is found throughout the world's oceans as well as under the frozen ground of countries with high latitudes. While global estimates vary considerably, the U.S. Department of Energy says, the energy content of methane occurring in hydrate form is "immense, possibly exceeding the combined energy content of all other known fossil fuels." [UPI]

No one has yet pursued hydrates in a major commercial way, so their enormous potential sits untapped. Japan succeeded with a test well in Canada two years ago, and now aims to test near its home shores.

A consortium led by the Japanese government and the Japan Oil, Gas and Metals National Corporation (Jogmec) will be sinking several wells off the south-eastern coast of Japan to assess the commercial viability of extracting gas from frozen methane deep beneath local waters. Surveys suggest Japan has enough methane hydrate for 100 years at the current rate of usage. [The Guardian]

that a warming ocean could unexpectedly release some of that methane, which would not be good news. When we burn methane for energy and call it natural gas, it produces fewer carbon dioxide emissions than coal. But methane

itself, should it escape, is a far worse greenhouse gas than carbon dioxide. And some environmentalists are concerned that drilling could

inadvertently [set] off undersea landslides, which could wipe out nearby seafloor life, and uncontrollable methane leaks from destabilized gas and hydrate formations. Massive eruptions of methane gas from melting or collapsing undersea hydrates have occurred naturally in the distant past as a result of rapid climate warming, studies have shown. [The New York Times]

There are methane hydrate deposits off the Indian, Russian, and Chinese coasts, too, as well as elsewhere in the world. So if Japan takes the dive, the gas rush could be on. On the land, the United States is one nation rich in shale gas

, another voluminous but difficult to reach source of natural gas. Vast formations of such shale stretch beneath Arkansas, Texas, and the northern Appalachians. Shale rock is not porous, though, so it's hard to suck the gas out of there, and extraction often requires controversial hydraulic fracturing

. The upshot is, natural gas is going to be an increasingly large part of the energy future. And though it's the cleanest-burning of the fossil fuels, it's still a fossil fuel. For this reason many energy gurus like T. Boone Pickens praised natural gas as a bridge fuel

to truly clean energy. But with so much of it to be had, it's easy to image the world's powers going ga-ga for gas at the expense of renewables development. Back to the danger, and one thing that doesn't make me feel encouraged:

“Can environmental disaster happen by gas hydrate production? The answer is no,” Koji Yamamoto, a project director for the Japan Oil, Gas and Metals National Corporation, told The Asia Times in December 2009. [The New York Times]

"Methane hydrate consists of pure water and methane, and no harmful substances. Some people are also afraid of a chain chemical reaction" in the extraction process, Yamamoto said. "However, it never happens. The gas hydrate is quite stable material ... Geological events of massive gas hydrate dissociation might be caused by changes in global scale ocean conditions. Artificial gas production is a completely different phenomenon."

Problem #1: Saying that methane isn't "harmful" is like saying (a la Michele Bachman

) that carbon dioxide isn't bad because it's natural. As with carbon dioxide, it's not about come molecule somehow possessing a mystical essence of good or evil: it's a matter of concentration, and higher concentrations of atmospheric methane would be bad news for us humans. Problem #2: Many oceanographers would say that the ocean is changing on a global scale

, which is why some of them are so freaked out

about hydrate dislocation. Problem #3: No, local drilling probably won't cause global Armageddon. We certainly hope not, anyway. But because of the undersea prize to be pursued, hydrate extraction could soon be a global industry, and the implications of that remain unknown. Related Content: DISCOVER: 10 Ways Methane Could Brake Global Warming–Or Break the Planet

80beats: Globe-Warming Methane Is Gushing From a Russian Ice Shelf