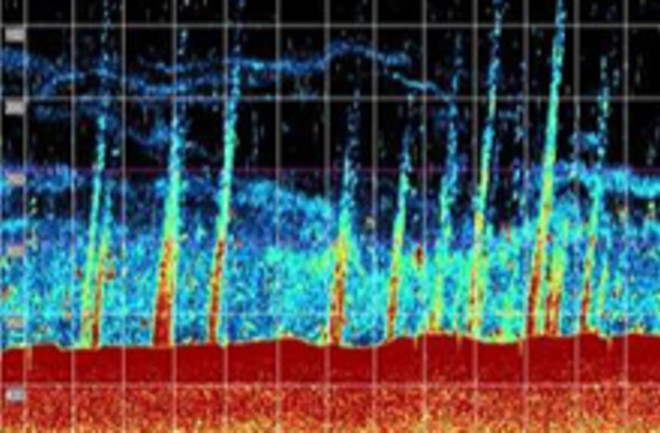 At the bottom of the Arctic Sea lie vast deposits of methane gas trapped in frozen, icy forms called methane hydrates, and climate scientists would very much prefer that it remains trapped down there. Methane is a powerful greenhouse gas, and some researchers worry that a warming ocean may melt the icy structures, allowing the gas to travel up through the water to the atmosphere, where it could further contribute to global warming. Now, scientists who have been scanning the seas for signs of trouble say they may have found some. The researchers spotted 250 plumes of methane gas bubbling up through the sea north of Norway.

The region where the team found the plumes is being warmed by the West Spitsbergen current, which has warmed by 1 °C over the past 30 years. "Hydrates are stable only within a particular range of temperatures," says [study coauthor Tim] Minshull. "So if the ocean warms, some of the hydrates will break down and release their methane" [New Scientist].

However, the scientists couldn't prove that the methane is being released as a direct result of the warming, and say it's possible there have always been methane seeps like these. The plumes, reported in the journal Geophysical Research Letters, were detected using a kind of sonar that is typically used by biologists searching for shoals of fish. All of the gas plumes spotted by the researchers dissolved into the water before reaching the ocean's surface, meaning that bubbles of methane weren't escaping into the atmosphere to contribute to global warming.

Just because it fails to reach the surface doesn't mean the methane is harmless, though, as some of it gets converted to carbon dioxide. The CO2 then dissolves in seawater and makes the oceans more acidic [New Scientist].

It isn't yet clear how the plumes relate to global warming, or whether similar plumes are escaping from the seabed elsewhere in the Arctic. But lead researcher Graham Westbrook says the findings should be considered a serious warming sign.

"If this process becomes widespread along Arctic continental margins, tens of megatonnes of methane a year - equivalent to 5-10% of the total amount released globally by natural sources, could be released into the ocean" [BBC News]