Hurricane Florence Intensified Fast. We Still Don't Understand Why Some Storms Fizzle And Others Erupt 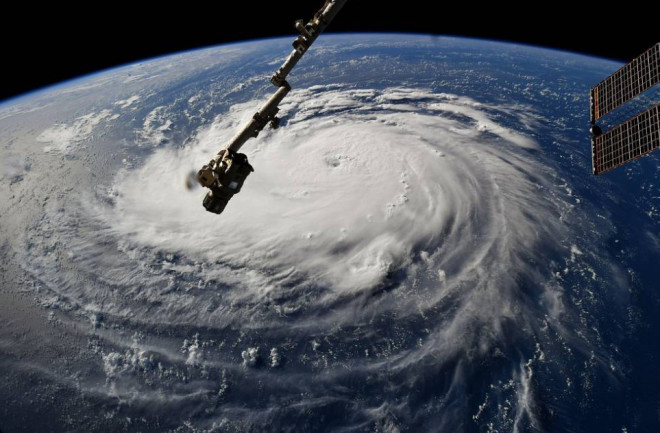 Astronaut Ricky Arnold captured this photo of Hurricane Florence from the International Space Station on September 10, 2018. (Credit: NASA) As Hurricane Florence careens toward the Atlantic coast, more than a million Carolina residents are evacuating while millions more are hunkering down with supplies. Hurricane Florence intensified incredibly rapidly this week, morphing from a tropical storm to a Category 4 hurricane in less than 48 hours. How it intensified is understood, but scientists still struggle to predict which Atlantic hurricanes will intensify quickly – or not – during their journey across the ocean.

Where a Hurricane is Born

Atlantic hurricanes originate over land in Africa as systems called Easterly Waves. After these baby storms move from east to west across the African continent, they begin their coming-of-age quest across the Atlantic. Not all of them make it. “It’s actually one of the biggest mysteries of atmospheric sciences," says Rosimar Ríos-Berríos, a researcher at the National Center for Atmospheric Research. "Every year we have many, many of these systems coming off Africa, and only a few of them become hurricanes.” In general, conditions that fuel hurricanes are well understood. When the clouds that form around low pressure systems meet light wind shear (winds that are the same speed and direction at all altitudes) and warm water temperatures, the storms pull energy from the ocean and grow in size and speed. The more these factors align, the more energy hurricanes pick up as they cross the Atlantic. Just one condition out of place – dry air, or strong winds – and the system won’t become a hurricane. But, says Ríos-Berríos, “even with all the conditions at the right place and time, there may be something chaotic about the system that may not allow it to become a hurricane. It is a difficult but very relevant problem.” What happens at the cloud scale is also critical for rapid hurricane intensification, but why it happens is not well understood, says Ríos-Berríos. She says cloud formation during hurricane intensification is a bit of a “chicken or egg” conundrum. For a system to grow into a hurricane, clouds have to accumulate around a low pressure system over the ocean where winds are rotating counter-clockwise. But these low pressure systems are caused by the accumulating, rotating clouds. “We have a lot more to learn about rapid intensification," she says. "It’s very likely there are more small scale processes that we don’t understand.”

The Making of a Meteorologist

Ríos-Berríos studies these processes in hopes of improving hurricane predictions. She grew up in Puerto Rico, where she and her family lived through a number of hurricanes. These experiences inspired her career in atmospheric research. “The most memorable for me was Hurricane Georges," she says, "which was a Category 3 when it made landfall. Living in Puerto Rico, there was a lot of uncertainty. It was always, is it coming or not, is it coming or not? With Puerto Rico being such a small island, a small change makes a very big difference. “I got very curious about the forecasting aspect and thought, I’m going to become a meteorologist and maybe go on TV and predict them better. Then I had a summer internship and discovered I liked doing research instead. So that’s how I got into this – with the hope of doing research that can lead to doing better predictions of hurricanes.”

One of the signs that Hurricane Florence was rapidly intensifying was the ring of clouds visible all around the low pressure center. This allowed the eye to form, which facilitated the rapid conversion of energy from the ocean into the hurricane. The ocean temperatures were particularly warm – 84 degrees Fahrenheit – which allowed a particularly nasty storm to form. It’s unknown yet how wind conditions might cause Hurricane Florence to stall over land and exacerbate damages like 2017’s Harvey did, says Ríos-Berríos. This occurs when winds from the west meet winds from the east, canceling each other out and causing the storm to stay put instead of blowing past. A final complication that other recent hurricanes haven’t faced is the mountains in the Carolinas. When moist hurricane air hits the mountains, it will be forced to go up. When moist air rises, it turns into clouds, and leads to even more precipitation. This rain shadow effect could turn Hurricane Florence into even more of a monster than it already is. "Water, not wind, is the leading cause of fatalities during hurricanes," says Ríos-Berríos. "It really is a very concerning threat and should be taken very very seriously."