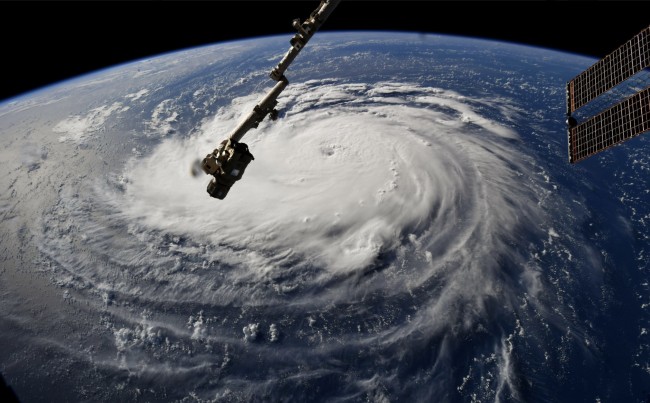 Astronaut Rickey Arnold took this spectacular photograph of Hurricane Florence from the International Space Station at 8:10 a.m. EDT on Sept. 10 as it moved west across the Atlantic. Please click to enlarge it. (Source: NASA) When I woke up this morning, Hurricane Florence was a Category 1 storm with maximum sustained winds a little above 100 miles per hour. As the storm has moved over very warm waters during the day, it has exploded in intensity to a Category 4 storm with max winds of 140 miles per hour. As the National Hurricane Center put it this afternoon:

Unfortunately, the models were right. Florence has rapidly intensified into an extremely dangerous hurricane . . . 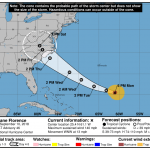 The forecast shows Florence strengthening even further and approaching Category 5 strength tomorrow. (Click on the thumbnail at right for the current forecast track.) It's not yet clear whether it will maintain that strength until its almost-certain landfall on the U.S. East Coast on Thursday. But the hurricane center was also grimly direct in this conclusion:

The bottom line is that there is high confidence that Florence will be a large and extremely dangerous hurricane, regardless of its exact intensity.

Should Florence hit at Category 3 strength or above in the Carolinas, storm surges could be nothing short of horrific — between 15 and 20 feet, and possibly more, according to meteorologist Jeff Masters, writing in the Category 6 blog. And it gets worse: as Florence approaches the coast, the meteorological setup has begun to look just like that for Hurricane Harvey. That's really bad news, given that Harvey is in a tie with Hurricane Katrina for costliest mainland U.S. tropical cyclone on record. Both storms are estimated to have caused $125 billion in damage. After making landfall along the Texas coast in August 2017, Harvey meandered slowly over eastern Texas, dropping gargantuan amounts of rainfall on the greater Houston area — more than 60 inches in places, causing catastrophic flooding that inundated many thousands of homes. The storm went on to take the record for wettest tropical cyclone on record in the United States. Florence is shaping up similarly because of a ridge of extreme high pressure that is forecast to develop off the New England coast. "The strength of this ridge will be unprecedented in 30 years, according to forecast models," writes Greg Porter at the Washington Post's Capitol Weather Gang blog. That will do two things, according to Porter, an atmospheric scientist and meteorologist. First, it will block Florence from curving out to sea, thereby directing it to its probable landfall in the Carolinas. Second, it should cause Florence to stall after landfall and trap it in the same general area for days. The bottom line is that even after landfall, "the storm will still be dumping tons of rain over the same locations for several days," Porter writes. "It could be similar to Hurricane Harvey's impact on Texas and Louisiana in 2017." Back to the here and now, two factors are helping Florence grow in strength: low wind shear and very warm sea surface temperatures. https://twitter.com/NEWeatherRants/status/1038957879502557184 The low wind shear means little is interfering with Florence's structure. And at the same time, the storm "is getting supercharged" by the very warm waters it is passing over, according to Penn State climatologist Michael Mann, writing in a Tweet today. Sea surface temperatures have been running very high in a huge swath of the Atlantic for quite awhile now: 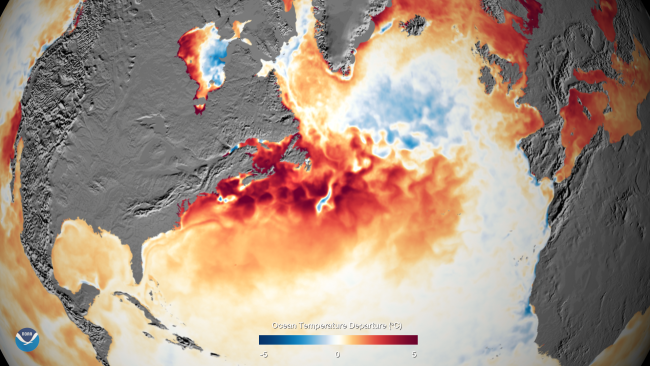 Using data from polar-orbiting satellites, the National Oceanic and Atmospheric Administration created the visualization above to map areas where August 2018 sea surface temperatures have been warmer or colder than average. I hope to follow up at some point with a post that delves into the possible connections between climate change and hurricanes. So please check back!