Likely churned out by factories and engines over 6,000 miles away, iron, lead, uranium and more traveled halfway around the world. 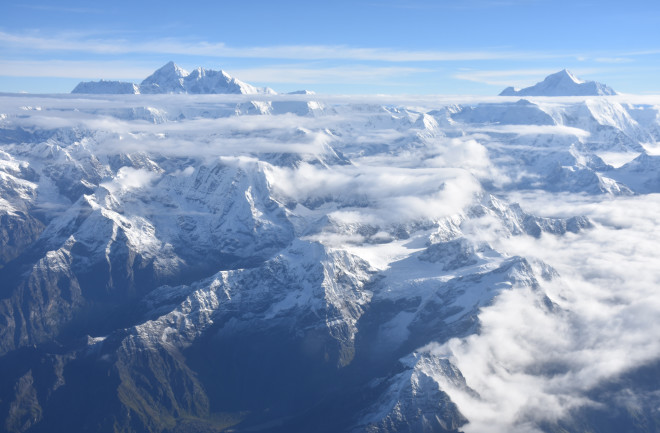 Even in the remote Himalayas, the Industrial Revolution made itself felt. (Credit: swapnil vithaldas/Unsplash)

In the 1760s, British business owners swung open the doors to a cutting-edge innovation: factories. But behind those harbingers of industrialization lay coal, the fuel for their furnaces, pumps and engines.

As revamped manufacturing practices spread around Europe through the 19th century, the polluting byproducts of coal-powered engines spread even farther — possibly to the peaks of the tallest mountain range on Earth.

Samples from the Himalayan glacier Dasuopu dating back to the Industrial Revolution contain unusually high levels of metals like iron, lead and uranium. A team of researchers analyzing the ice sample think the presence of these metals indicates that coal-burning byproducts of the Industrial Revolution — the epicenter of which lay about 6,400 miles from Dasuopu — spread all the way to this frigid location almost 24,000 feet above sea level.

The finding, published in the Proceedings of the National Academy of Sciences, adds to our understanding of when and how human choices began affecting the planet at large. “To evaluate the current levels of contamination and pollution, it is important to define when humanity first started to have large-scale impacts on our planet,” writes study co-author Paolo Gabrielli, a paleoenvironmental researcher with the Ohio State University, via email.

The Dasuopu ice is one of many samples that might preserve evidence of human industry. For example, lead from Roman manufacturing shows up in Greenland. Mining, smelting and burning release byproducts into the air and water, and weather patterns can carry the material far away from factories and into snow deposits.

In places like the Alps or the Himalayas, layers of snow melt and solidify year after year, leaving chronological stripes in the ice. When researchers drill down and extract an ice column, or core, they can determine which molecules were present in each year's snowfall.

The Dasuopu core is the highest-elevation ice sample that researchers have taken. Generally, the higher the elevation, the less likely the ice will be contaminated by nearby modern manufacturing, a problem that lower-altitude ice samples may have. “Ice extracted at very high elevation can in fact be more representative of continental [and] hemispheric atmospheric processes,” Gabrielli says.

Gabrielli and his team focused on a 470-foot-long segment of the ice core that corresponded to the years 1499 through 1992. Chemical analysis showed 23 different metals in trace amounts. The team found higher-than-normal levels of elements like cadmium, nickel and bismuth starting in the late 1700s. These elements appear in coal soot.

Starting around the same time, written records suggest that the vast majority of coal consumed in the world likely came from Western Europe and the U.K., Gabrielli says. The team also thinks that some of the zinc appearing in the ice came from forest burning in Europe, which may be linked to the need for expanded infrastructure.

Because their analysis is based on comparing the core samples with existing historical records, the researchers say they can't rule out other, undocumented industrial processes contributing to the trace metal deposits.

Those deposits are not at toxic levels. If released from the ice, however, the heavy metals could accumulate in plants and animals — a process that might eventually harm an ecosystem. It's a possibility, Gabrielli says, that needs more research.

But the presence of coal byproducts in the supposedly-pristine snows of Earth's tallest mountain range is a stark reminder that the pollution we create doesn't always harm just the places where it's produced.

Editor's note: This story has been updated to include the correct location of lead particles from the Roman Empire. They were found in Greenland.