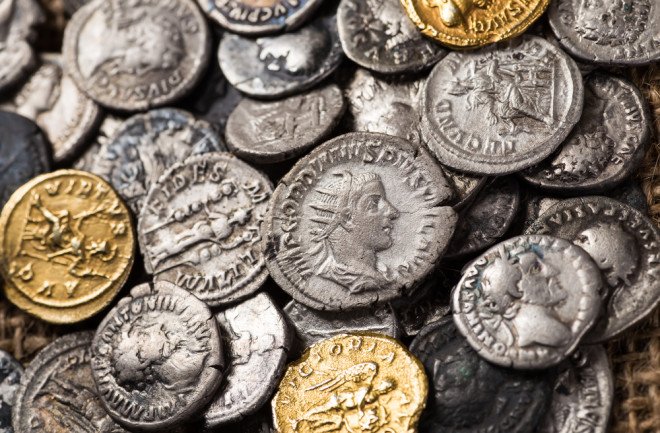 Scientists today are searching for the "Golden Spike," evidence for the presence of man that will show up even hundreds of thousands of years from now. Such a marker would officially kick off the Anthropocene, the epoch of man, and candidates include the presence of radiation from nuclear bomb tests in geological samples and elevated levels of CO2 preserved in ice cores.

But even today, we can look back into the layers of Earth's past and see evidence of humanity. Researchers have peered into an ice core from Greenland and found that they can track the fortunes of the Roman Empire over a period of almost 2,000 years. Elevated levels of lead gave the Romans away — a byproduct of the silver smelting used to make their unique coinage.

The Romans, by proxy of lead, show up clearly in the ice, and fluctuations in the lead levels match up with periods of good fortune and bad luck for the empire.

Scientists had already noticed this period of Roman history corresponded with high levels of lead in ice cores and peat bogs. But with this latest study, published in PNAS, researchers from the University of Oxford examined them in unprecedented detail by melting small segments of the more than quarter-mile long ice core and analyzing them.

They ultimately got around 12 measurements per year they studied, according to Science. The fine resolution of their data let them see how lead levels rose or fell from year to year. Silver coins were relatively commonplace in the Roman Empire, and beginning around 400 BCE, lead levels began to reach consistently non-natural levels, the researchers say.

Mined silver ore usually contains lead, and that lead is released into the environment as the precious metal is purified. In Spain, where significant quantities of Roman silver were mined and smelted, the prevailing air currents eventually wafted that lead to Greenland, where it settled into the ice. For over 500 years, lead levels remained high, though they varied considerably.

But beginning around 165 CE, they drop off sharply, consistent with a particularly deadly epidemic that ripped through the Roman Empire around that time. It was the Antonine plague, likely either smallpox or measles, and probably brought back by Roman soldiers returning from military campaigns in the East.

The disease likely killed millions, and substantially weakened the Roman army. And as the empire grew weaker, so did its demand for currency, causing the drop in lead levels the researchers noticed.

Smaller events show up in the record as well. The researchers note dips in lead corresponding to periods of war and invasion around 100 BCE as the Romans waged battles in Spain and France. An increase in lead coincides with a period of relative stability following the Roman civil wars that lasted for almost 180 years beginning just before the Common Era.

A different increase marked the First Punic War, a time when Rome needed coinage to pay mercenaries. Other marked drops in lead levels corresponding to lower levels of silver smelting were noticeable around 64 CE, and again during the third century CE, when the Romans began mixing other metals into their currency in increasing quantities.

The amount of lead the Romans were putting into the atmosphere was relatively small, though, at around 1 millionth of a gram per square meter every year. That's less even than the amount contributed by background sources like volcanism in most years. And it pales in comparison to the levels of lead flying around the atmosphere today.

One study of ice cores from Canada's Mt. Logan found lead levels of more 50 millionths of a gram (or 50 times greater than the Roman contribution) above background between 1981 and 1998. That lead probably came on air currents from Asia.

The new research mostly helps to confirm historical records from the Roman Empire, but it also suggests that evidence of the Anthropocene might go back a lot further than we currently think it does. That we can look back today and see signs of the Romans 2,000 years ago says that humans have been leaving a lasting mark on the environment for quite a long time.