Global Average Temperature Cools a Bit in November, But No Pause in Global Warming — And There Never Was One

How temperatures in November departed from the long-term average is depicted in this map released by NASA today (Dec. 14, 2014). Much of North American experienced unusually cool temperatures during the month. (Source: NASA/GISS) This past November was the ninth warmest globally in a record extending back to 1880, according to data released today by NASA. | Update 12/15/14: The National Oceanic and Atmospheric Administration came out with its own, independent report today. It ranks November 2014 as the 7th warmest on record. Their data suggest that 2014 is still on track to be the warmest year globally on record. | This represents a bit of a cool-down from October, which was the warmest globally. What happened? The answer is weather. In the map above, check out that big blue blob sitting over most of North America (with California and Alaska being the notable exceptions). Temperatures here were as much as 4 degrees C cooler than the long term average, helping to bring down the global average temperature for the month. Thanks to the just announced climate agreement in Peru, this topic is threaded with politics even more intensely now than usual. So you may hear a familiar chorus of politicians and pundits using this one month to advance a familiar meme: there has been no global warming since 1998. If you do hear this, never mind that the past 12 months have been the second warmest (according to NASA's data; NOAA's data will be released soon), and also that a balmy December could still qualify 2014 as the warmest on record. None of that matters. Because the meme is no more than that: an oft-repeated idea spread rapidly on the Internet. And wrong. I explored the so-called "hiatus" meme in Discover's Year-in-Science issue, which was published a couple of weeks ago. Then, on December 4th, Stefan Rahmstorf, a climatologist with the Potsdam Institute for Climate Impact Research in Germany, published a fascinating and incisive scientific take-down of the idea. I think it's "dispositive," as my lawyer friends would say. So I decided to revisit the topic and try my hand at explaining Rahmstorf's most important points for non-scientific readers.  I must admit that for my Year-in-Science story, I wrestled with what word to use to describe what has really been happening — a slowdown in rising temperatures since about 1998. That's because some scientific papers talked about an apparent "pause" or "hiatus" (for example, this one) in what had previously been a more or less steady upward trend in global average surface temperature. I used italics there because the Earth's climate system consists of much more than what's happening at the surface. In fact, as many papers pointed out, there has been no real overall pause: the Earth system has been continuing to accumulate heat, thanks to humankind's emission's of carbon dioxide and other greenhouse gases. It's just that a lot of that heat seems to have been going into the oceans, slowing the rise in temperatures at the surface. Moreover, it's important to emphasize that each of the last three decades has been warmer at the surface than every preceding one back to the start of modern record keeping in the 1880s. Even so, scientists have used the words "pause" and "hiatus" to describe what has been happening to the long-term warming trend at the surface of the Earth. Rahmstorf uses a series of graphs to illustrate why this is incorrect. 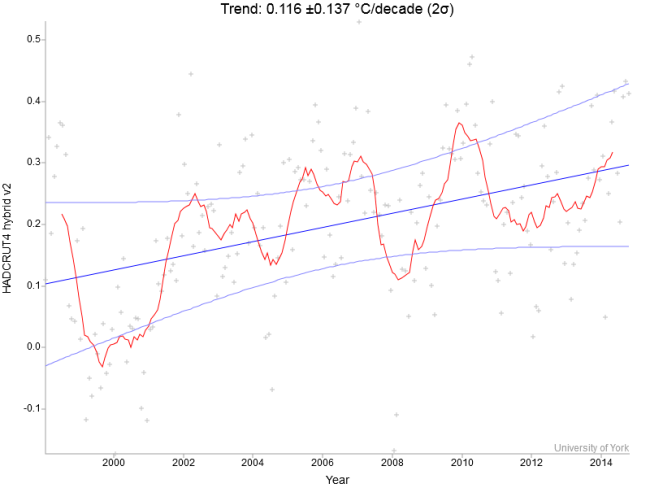 Global average temperature trend, 1998-present. (Source: Stefan Rahmstorf/RealClimate) First, check out this one. It depicts global average temperature from 1998 to the present based a dataset known as HadCRUT4. These data have been adjusted to account for a problem that has led to a serious underestimation of global temperatures. The problem is that the HadCRUT4 dataset is based on information from sampling stations that cover just 84 percent of the globe. Un-sampled regions are concentrated in Africa and — critically — at the poles. From a variety of measures, not just weather stations, we know that the Arctic is warming faster than the rest of the globe. So it has been very important to find a way to fill in those sampling gaps and thereby more accurately quantify global warming. Early this year, researchers announced that they had developed a way to do just that. The graph above reflects that work. The little gray crosses are monthly data points. The red line is the 12-month running mean. And the straight blue line is the linear trend. That blue trend line is going up, indicating a rate of warming of 0.116 °C per decade. Clearly, there has been no "hiatus," or "pause" in warming since 1998, as is often claimed. But what about those lighter blue lines? They are a way of visualizing uncertainty in whether that trend is real or due to chance. To cut to the statistical chase, the uncertainty here (the "confidence interval") is large enough to indicate that the trend could very well have occurred due to chance alone, without any prodding from our emissions of heat-trapping carbon dioxide. As Rahmstorf emphasizes, that doesn't mean the trend isn't real. It most certainly is. But it could be due to the completely natural variations that take place in the climate system from year to year, not to us. The problem here, as Rahmstorf points out, is the short time period under consideration. There's just too much "noise" — too much random variation — to discern whether a real trend exists. For a statistically significant trend to emerge, meaning one that is not due merely to chance, you need a longer period. 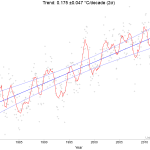 Source: Stefan Rahmstorf/RealClimate What would a longer period look like? Click on the graph at left for an answer. Once again, we have a rising trend line, this time showing clear warming since 1980. But now the uncertainty is small enough to rule out pure chance. This trend most likely is due to us. As Rahmstorf puts it in his RealClimate post:

The lesson of course is to use a sufficiently long time interval . . . if you want to find out something about the signal of climate change rather than about short-term “noise”. All climatologists know this and the IPCC has said so very clearly. “Climate skeptics”, on the other hand, love to pull short bits out of noisy data to claim that they somehow speak against global warming – see my 2009 Guardian article Climate sceptics confuse the public by focusing on short-term fluctuations on Björn Lomborg’s misleading claims about sea level.

Below is what I thought was the single most compelling piece of evidence presented by Rahmstorf. It's a graph that depicts places where a significant change has occurred, as indicated by a sophisticated statistical technique called "change-point analysis." 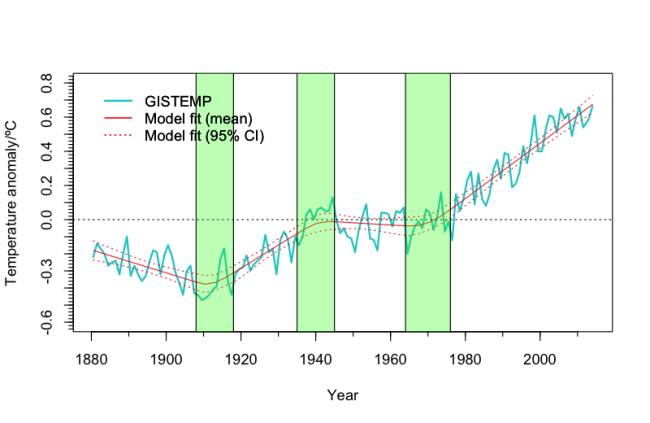 This graph shows how global average temperature has departed from the long-term mean since 1880. The green bars indicate times when the trend changed in a significant way. (Graph by Niamh Cahill. Source: Stefan Rahmstorf/RealClimate) As the graph shows, there has been no significant change in the upward trend of global average temperature since about 1970. No pause, no hiatus, no significant change at all in the trend over the past 10 years. In a recent post on this topic

(one that helped inspire me to do this one), Andrew Revkin included this marvelous animation that explains in simple visual fashion what's going on — or as Revkin says, "in a way that even a member of Congress might grasp": http://youtu.be/e0vj-0imOLw And last but not least, I'll leave you with this graphic: 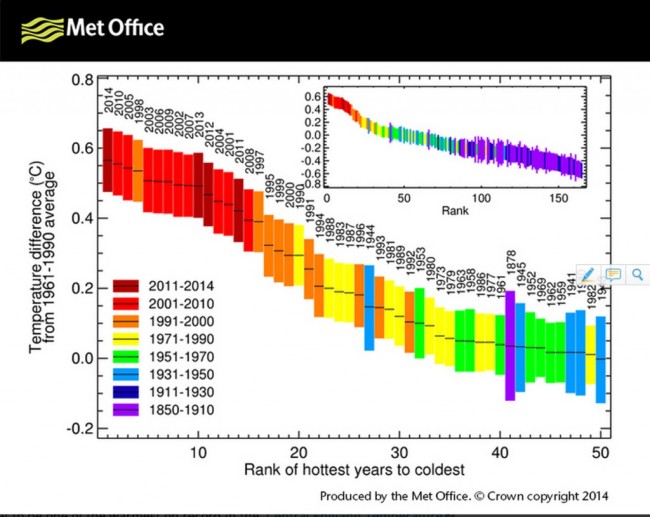 Source: U.K. Met Office The vertical axis shows how temperatures departed from the long-term average. And the colored bars show how each year's global average temperature ranked. Keep in in mind that the bars are not arranged in chronological order. Rather, the hottest years are to the left and the coldest to the right. You'll note that 2014 is listed as the warmest of all. That placement was based on data available at the time. We'll see what happens when the data for December come in. But I'm sure 2014 will still rank very highly, and possibly as the warmest. Also note that with the exception of 1998 and the year 2000 itself, every year in the 21st century has been warmer than all other years in the record. Some hiatus.