The Rhea Fire in Oklahoma, seen in this image, grew to megafire size. And it wasn't the only blaze to scorch the High Plains in April. 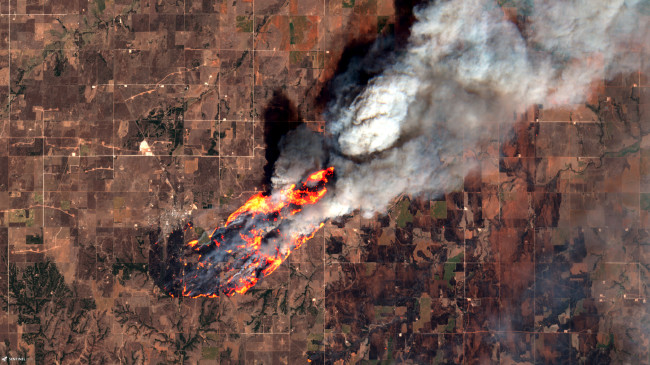 The Sentinel-2 satellite captured this image of a wildfire burning near Putnam, Oklahoma on April 13, 2918. (Source: Sentinel-2 satellite data from ESA processed by Pierre Markuse) That's right — this image of the roaring Rhea Fire in Oklahoma was captured not from an aircraft but by a satellite about 500 miles above Earth's surface. At the time, on April 13th, the blaze was just getting going. Pushed by strong winds and exacerbated by high temperatures and bone-dry humidity of just 3 percent at one point, the blaze turned into Oklahoma's third megafire in three years. That term, "megafire," is not my attempt at being sensationalistic. The National Interagency Fire Center has officially adopted it to describe a fire that has burned at least 100,000 acres. Before 100 percent containment was achieved today, the Rhea Fire had reached 286,196 acres in size — equivalent to more than three quarters the size of the city of Los Angeles. The recurrence of megafires in Oklahoma can be attributed to a number factors, including alternating extreme wet and dry periods — a pattern seen globally and associated with human-caused climate change, according to meteorologist Bob Henson of Weather Underground. Unusual moisture, such as that seen in Oklahoma during the summers of 2016 and 2017, contributes to growth of lush vegetation. Then, when dramatic drying arrives, all that unusually luxuriant vegetation is primed to explode in fire once ignition happens, and low humidity and wind fan the flames. As Henson puts it:

The landscape of the Southern High Plains has been extraordinarily dry over the last six months. The western third of Oklahoma has seen little more than 2” since October—only about 20% of average—and most of the Texas and Oklahoma Panhandles have received much less than 1”, making it the driest six months on record in some locations.

Given those conditions, the Rhea Fire was just one of numerous conflagrations to erupt on the High Plains during April. More about those in just a minute. But first, some details about the extraordinary image at the top of the post: It consists of visible light captured by the polar-orbiting Sentinel-2 satellite, plus light in the infrared part of the electromagnetic spectrum. The infrared data acquired by the satellite allow us to see those flame-like features. If you were an astronaut looking down, they wouldn't appear quite so dramatic. But if your eyes were sensitive to infrared — to the intense heat billowing from the raging fire — this is what it would like. Before moving on to a broader view of the High Plains, I want to give an enthusiastic shout-out to Pierre Markuse. He processed the Sentinel-2 data to create the image of the Rhea Fire. You can find more of his spectacular remote sensing work on his Flickr page. 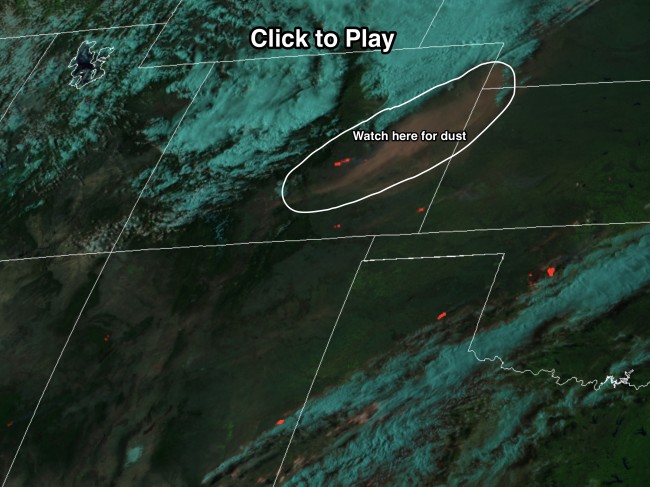 An animation of GOES-16 weather satellite imagery acquired on April 17th. Click on the image for the animation, and watch for blowing dust in the circled part of the screenshot, as well as the heat signatures from wildfires. (Source: RAMMB/CIRA) Here's a much more expansive view that includes portions of the High Plains in Colorado, New Mexico, Texas, Oklahoma, Kansas and Nebraska, as well as parts of other states. The animation consists of imagery acquired by the GOES-16 weather satellite on April 17th. As the false-color animation gets going, watch for the appearance of orange hot spots indicative of wildfires being fanned by high winds. Also look for huge amounts of dust originating in Colorado and blowing hundreds of miles to the east by those winds. A personal note about those winds: I was coming out of a doctor's appointment on crutches when air avalanching over the Front Range of Colorado advanced over the plains to the east of the mountains. I commented to my wife that the sky was filled with dust. And no more than 30 seconds later we were blasted by winds that I later learned topped out at about 90 miles per hour. I was very nearly blown off my feet. To stay upright, I had to brace myself with the crutches and bend over with my head facing into the gale. I was lucky — I didn't go down. But an elderly man with a cane toppled over. Tragically, a woman was killed in Boulder when those winds caused a tree limb to fall on her.