Endangered or Threatened? A New Fight Over Polar Bears' Status 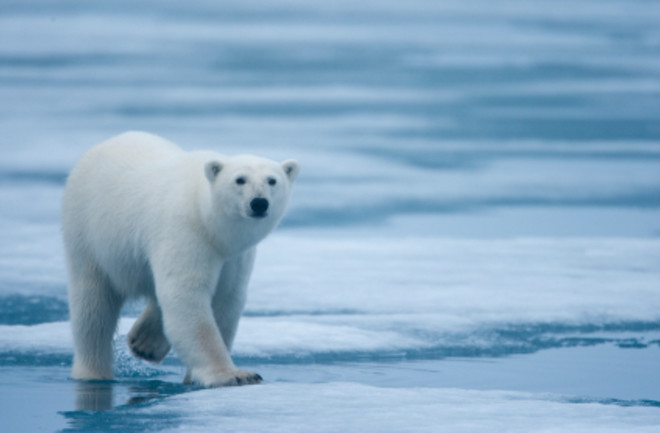 The clock is suddenly ticking for the U.S. Department of the Interior to defend its classification of the polar bear as "threatened," rather than the more protective "endangered" classification. The "threatened" designation dates back to the George W. Bush administration, but in response to a series of lawsuits concerning the polar bear, U.S. District of Columbia District Judge Emmet Sullivan said this week that the government needs to review that decision, because it was not based on a proper reading of the Endangered Species Act.

In his decision, Judge Sullivan said that the agency was wrong to conclude that a species had to be in imminent danger of extinction in order to qualify as an endangered species. He said that the Endangered Species Act was ambiguous as to whether a species had to be on the brink of extinction in order to be considered endangered. He did not rule on the merits. [Wall Street Journal]

If the bears were moved to "endangered," that switch could bring with it a wave of legal wrangling about how to protect them. Under the current rule, federal regulators can't set climate policy in order to protect the bears, even though greenhouse gas emissions are responsible for the melting of their sea ice habitat.

The Interior Department has until December 23 to respond. Up in the Arctic

, there's a bit of good news for the bears—and their new prey. Increasingly, polar bears are beginning to rely on the eggs of snow geese

as a major foodstuff. But if the bears devour all the eggs and wipe out the geese, that wouldn't be such a great outcome for either one. Researchers who modeled the predator-prey relationship

, along with expected environmental change from global warming, write in the journal Oikos that the bears may indeed devour many of the eggs.

However, climate change will also cause increased variability from year to year, and as a result, there will be some years when there is no overlap at all -- either because the geese have fledged earlier, the bears have come ashore later, or both. Those periodic years of "mismatch" will, they conclude, enable snow goose numbers to rebound again. [Discovery News]

Polar bears aren't the only massive mammal trying to beat the heat of a warming world. Check out the new DISCOVER article on walruses

trying to adapt—and the adventures of the scientists who try to study them. Related Content: DISCOVER: Will the Walrus Withstand a Warmer World?

80beats: Polar Bears Will Have a Protected Home in Alaska