Will the Walrus Withstand a Warmer World?

As the Arctic warms, researchers are scrambling to predict whether the walrus can adapt to its rapidly changing home. 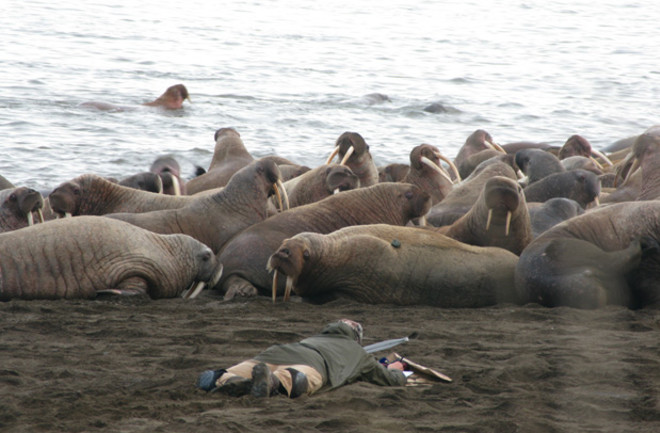 Researchers are tagging walruses to learn more about them. (Credit: USGS)

In September 2009, a team of biologists flew over the remote Alaskan beach of Icy Cape on a reconnaissance mission. Thousands of Pacific walruses had reportedly broken from their normal habits and shambled onto the shore there, and the scientists were keen to observe their behavior. But they didn't find an unruly mosh pit of jostling animals—the walruses had moved on, leaving behind only a scattering of small carcasses on an empty beach.

"We found over 100 dead baby walruses," says Tony Fischbach, a biologist with the U.S. Geological Survey's walrus research program. The dead youngsters didn't show any signs of disease, says Fischbach: "They were all fat little sausages."

In three of the last four summers, thousands of walruses have mysteriously come ashore in Alaska. This unprecedented behavior occurred when ice in Chukchi Sea drastically retreated, leaving the marine mammals without their usual summertime habitat. Alaskan scientists aren't the only ones who have noticed: Climate change activists have already adopted the walrus's cause, and the U.S. Interior Department is now deciding whether to list the walrus as endangered species. But in the midst of all this hustle, Fischbach and his colleagues are struggling to determine whether the changing climate poses a serious threat to the species' survival.

Carrie Goertz, a veterinarian with the Alaska Sea Life Center, was part of the crew that flew out to examine the dead walruses last year. Of the 62 animals that they examined, 60 were under a year old. "We found hemorrhaging," she says. "Our conclusion was that they died from being trampled." Walruses don't usually gather in huge numbers, but in these strange new Alaskan "haul-outs" the animals clump together in the thousands. If a young calf gets separated from its protective mother, Goertz says, it could easily be squashed by the herd.

The USGS researchers published a report (pdf) on the findings, but their work was far from done. After all, plenty of young walruses die each year on the sea ice, and Pacific walruses have come ashore on Russian beaches in past decades during their fall migrations. How could the scientists determine whether the summertime Alaskan haul-outs signaled a new, existential threat to the species?

The answer: By virtue of some extraordinarily challenging fieldwork.

"Walruses are fundamentally difficult to work with," says Fischbach in a resigned voice. "They range across a vast region that crosses international boundaries, the environment is inhospitable to humans, and it's expensive and difficult to get out there. It's far away from home—even just to buy a gallon of Coleman fuel to run your stove, it's about $25 per gallon." And then there's the difficulty of getting access to the animals. "About 80 percent of the time they're in the water, and that means they're feeding," says Fischbach. "That means they're at the bottom of the sea for seven minutes, then they pop up to breathe, and then they do it again."

To learn about the everyday lives of these difficult creatures, Fischbach and his colleagues have been attaching satellite tags to walruses—a difficult operation in itself, requiring the biologists to land a helicopter downwind of the herd, then slowly wriggle forward on their bellies until they can fire a tag into an animal's thick skin.

The tags have two simple sensors—one pressure gauge, and one saltwater detector—which together allow the researchers to determine how much time the walruses are spending in the water, and at what depths. The tags break down after two to three months, but that's enough time to compile extensive "walrus diaries" that the researchers are eager to read.

In these new Alaskan "haul-outs," walrus calves are a particular concern. (Credit: USGS)

Reading the walrus diaries gives the researchers insight into the animals' working lives. Female walruses typically rest on the ice between foraging trips to the sea floor, where they dine on clams and snails. "A cow just rolls off the ice to go down to the bottom and feed," says Fischbach. "There's essentially no commute time." But if they're resting on the shore instead, the longer commute to the feeding grounds could put them under stress.

By checking the diaries and seeing how many times the shore-based walruses have to go out to feed, they can determine if their new lives in this warmer Arctic require them to use more energy. "We can also combine that data with projections of sea ice, to predict how much more or less it will cost these animals to make a living over the next century," Fischbach says.

In August of this year, the ice once again retreated rapidly from the continental shelf, and away from the walrus's shallow water feeding grounds. (By September, the Arctic area covered by sea ice was the third-lowest recorded since 1979—the other record years were 2007 and 2008.) When the walruses came ashore at Alaska's Point Lay, the biologists were ready. Equipped with high-resolution video, they flew over the herd and collected footage that they hope can be used to count the number of calves. "Every third or forth female should have a calf," says Fischbach. "But I have the impression that there aren't as many calves as there should be."

Analyzing that data will take a while, but some groups aren't content to wait for all the results to come in. "The science is very clear and straightforward," says Shaye Wolfe, a scientist with the Center for Biological Diversity. "The walrus's essential habitat is melting under its very feet." Wolfe's group is pressing the Interior Department to categorize the walrus as either "threatened" or "endangered," a move that would give the federal government more oversight of commercial activity—like oil drilling—in the walrus's critical habitat. A decision is due in January.

There's simply no time to lose, argues Wolfe. "As a scientist I really respect proving our predictions, but that doesn't mean we should be incapacitated and refuse to take action," she says. " I think sometimes scientists are reluctant to sound the alarm until the animals are practically gone—and then they say, 'Oh yes, climate change really did it, that really was a problem.'"

Wolfe believes that the walrus faces a real risk of extinction. But Fischbach and his colleagues haven't taken such a categorical stance. A new report from the U.S. Geological Survey team found "a clear trend of worsening conditions for the Pacific walrus," but placed the probability that walruses will be rare or locally extinct by 2095 at less than 10 percent. However, the lack of data and the uncertainties of climate change make any estimate feel like a rough guess. Says Chad Jay, the report's lead author: "We're really in a phase of trying to see how the walruses respond to reduced sea ice conditions. It will be a while before we really have some answers."

Other potential changes to the Arctic are even more uncertain. For example, ocean acidification may reduce the populations of clams and snails that the walruses feed on; here, too, Wolfe says that the threat is certain. "The science predicting corrosive waters by 2050 is very strong," she says. However, while Jay agrees that "there's no question that ocean acidification is occurring," he argues that it's far from clear how this will affect walrus prey. "I think there's just a lot we don't understand right now," he says. "Not just ocean acidification, but how the ecosystem will respond to an earlier ice melt. Those are big questions that are actively being studied right now."

The Interior Department has the tough task of setting a definitive policy based on sparse data and competing interpretations. Meanwhile, the USGS team in Alaska will keep reading walrus diaries, counting calves, and planning for next summer's observations. Fischbach says he doesn't yet know whether the walruses will be able to adapt to their changing world, but he's determined to find out. "If we knew the prognosis, we wouldn't be doing the research," he says.