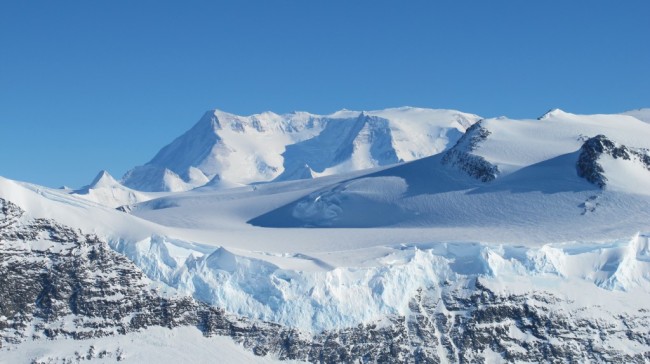 A nice sparkly ring with a piece of Antarctic ice on it---you have to admit, it would have a certain appeal. Scientists have confirmed for the first time that Antarctica's crust contains kimberlite, the igneous rock that often harbors diamonds. Antarctica was the last holdout---every continent on Earth contains kimberlites, which in some parts of the world are mined for diamonds. Australian researchers report

today in Nature Communications that the kimberlites, found in the northern Prince Charles Mountains, originate from the vast Gondwanan kimberlite area, dating from 120 million years ago during the Cretaceous period. These rocks are thus from the same source as the kimberlites found in all the major Gondwanan continents---Africa, India, South America and Australia.

The three samples of kimberlite that were found---one from a rocky outcropping in the Prince Charles Mountains and two others from boulders nearby---didn't themselves contain diamonds. But they are classified as "Group One," based on their makeup, which makes them more likely to contain diamonds than other types of kimberlites. Antarctica is protected from mining under the Protocol on Environmental Protection to the Antarctic Treaty, one of the many international agreements that govern activities in Antarctica. Signed in 1991, the treaty "explicitly bans any extraction activity relating to mineral resources, except for scientific purposes," according to the BBC

. The treaty is up for review in 2041. However, given the immense logistical difficulties that mining in Antarctica presents, it's unlikely that the allure of diamonds will spell the downfall of the agreement, says Teal Riley, a survey geologist at British Antarctic Survey: "Even among the Group One kimberlites, only 10 percent or so are economically viable, so it's still a big step to extrapolate this latest finding with any diamond mining activity in Antarctica." Image courtesy NASA