"Cool It": Climate Contrarian Bjorn Lomborg Takes His Message to the Movies 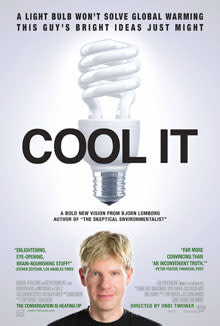 Climate change is causing areas of the world to heat and cool, and it seems a controversial new climate change film is doing the same to reviewers. The film is titled Cool It and was based on a book of the same name by Danish writer Bjørn Lomborg, a contrarian who delights in questioning the gravity of our planet's environmental problems. The movie was directed by Ondi Timoner, an award-winning documentarian. Lomborg has raised the hackles of environmental activists since he published The Skeptical Environmentalist a decade ago. Since then he has drawn closer to environmentalists on some issues--for example, he now maintains that global warming should be one of the world's "chief concerns." But in the new documentary, Lomborg still argues that money spent on trying to limit carbon output would be better spent on investment in green technologies and geoengineering. The film is currently enjoying a limited release across the United States. New York Times Dot Earth blogger Andrew Revkin compares Lomborg's Cool It to Al Gore's An Inconvenient Truth:

Does the film succeed? “Cool It” is eminently watchable — which is no surprise given Timoner’s involvement. Lomborg, as always, is charming and persuasive, frequently shown riding his bicycle through Copenhagen’s busy streets — in what has to be seen as a dig at Gore, who in his film is often seen racing through airports.

But it suffers from the same simplification syndrome that weakened “An Inconvenient Truth.”... In “Cool It,” Lomborg breezily ticks down a laundry list of high-tech ways to engineer the atmosphere, for example, but punts on the tougher questions related to such planet-scale enterprises — such as the inevitable diplomatic dispute over who sets the planetary thermostat and how blocking the sun does nothing to stem the buildup of carbon dioxide, much of which will stay in the atmosphere for many centuries. [The New York Times]

In the opinion of Wired's Hugh Hart

, Lomborg is a "charismatic tour guide" who ultimately fails to convince.

But when Lomborg — presented much of the time in full lecture mode — takes to the blackboard and scratches out figures numbering in the billions of dollars as estimates for what it would cost to make recommended fixes, one wonders if his largely untested propositions truly carry more weight than the doomsday extrapolations proffered by Gore and company. [Wired]

The range of ideas is eclectic, from the practical simplicity of cooling cities by changing the color of the streets to highly complex systems designed to alter atmospheric conditions. By suggesting there is light at the end of the global warming tunnel, Timoner has made "Cool It" a hopeful film. We just have to know where to look for the switch. [Los Angeles Times]

was also swayed by Lomborg's presentation:

If it's propaganda, it's surprisingly effective. With the charismatic, articulate (and, yes, kind of hunky) Lomborg in front of the camera for much of the film -- along with a parade of scientists who support his views -- "Cool It" makes a convincing case that there are better things we can do than drive a Prius. Not that there's anything wrong with that, he says; it's just not going to solve much.

All these critics seem to agree that Cool It is engaging, but none of them really grapple with the ideas presented in the movie. For example, some of the geoengineering schemes that Lomborg advocates could, if adopted on a grand scale, turn down the global thermostat by reducing the amount of sunlight hitting the Earth

. But that wouldn't stop the carbon dioxide in our atmosphere from gradually turning the oceans acidic

, a change that could have enormous repercussions. Watch the trailer below for a better idea of the film's voice and tone: Related Content: 80beats: Global Warming Dissenter Bjorn Lomborg (Sort of) Has a Change of Heart

80beats: 2 Trillion Tons of Polar Ice Lost in 5 Years, and Melting Is Accelerating

Discoblog: Chatbot Debates Climate Change Deniers on Twitter so You Don’t Have to

The Intersection: Al Gore’s New Book: A Focus on Solutions