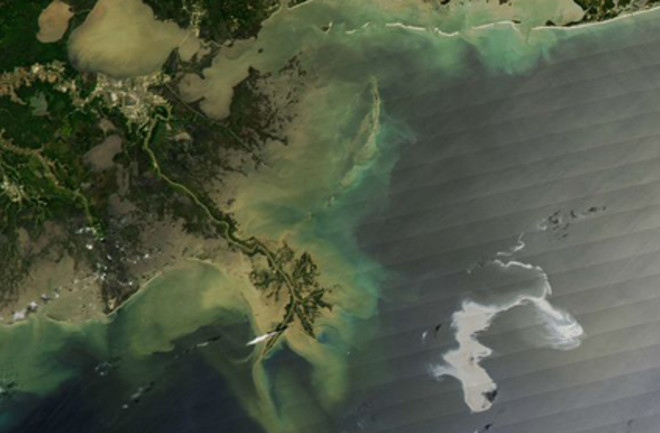 With the Gulf of Mexico oil spill spreading and the operations to contain it taking too much time, Rear Adm. Mary Landry says the Coast Guard is considering another option to keep the spill from reaching nearby American shorelines: setting the oil on fire. Yes, you read that right.

The idea of a controlled burn surfaced as a possible way to remove thick pockets of crude rife with baseball-sized tar balls from within the massive slick. That tarry crude poses the biggest threat to sensitive coastal areas. Landry said burning could begin as early as today [Houston Chronicle]

. BP, the company that leased the now-sunken oil rig, is trying to slow the leak via the work of submersible robots, but so far they've had no success. And so 42,000 gallons of oil continue to leak into the gulf every day. To keep the spill from becoming one of the worst in American history, the Coast Guard is considering all its options. During the operation, the Coast Guard would use its boats and booms to get the oil into a U-shape, then ignite it. Response teams attempted this in Newfoundland in 1993, and found that they could get more than half of the oil collected—but not without the trade-off of separate environmental damage.

The heat generated by the burning oil—a temperature of 1,800°F (982°C) was measured at the top of the boom at the Newfoundland burn—will cause the smoke to rise several hundred to several thousand feet and at the same time be carried away by the prevailing winds [National Geographic]

. The plume created should be similar to that of a large forest fire. The oil slick started about 50 miles off the Gulf Coast when the oil rig Deepwater Horizon exploded and then sank. Since then oil has spread outward in a hurry, and is now within 20 miles of the coast. While a controlled burn would give off plenty of nasty smoke, Landry says,

the impact on Louisiana's coastline, which contains some 40% of the nation's wetlands and spawning grounds for countless fish and birds, had to be considered [BBC News]

. Out at sea, the fumes from the fire could prove toxic to birds and other wildlife, but they have a better chance to escape that than if they find themselves stuck in the path of the water-borne oil. Meanwhile, BP will keep pressing its options to slow the spread. The underwater robots are trying to reach valves that control pressure in the well, and should they ultimately fail in that operation, the oil company is preparing to drill a secondary well to relieve some of the pressure. But that could take two to three months. Related Content: 80beats: Sunken Oil Rig Now Leaking Crude; Robots Head to the Rescue 80beats: Ships Race To Contain the Gulf of Mexico Oil Spill 80beats: Obama Proposes Oil & Gas Drilling in Vast Swaths of U.S. Waters 80beats: 21 Years After Spill, Exxon Valdez Oil Is *Still* Stuck in Alaska’s Beaches 80beats: 20 Years After Valdez Spill, Eagles Are Healthy; 7 Other Species Still Hurting 80beats: “Nanosponge” Could Soak Up Oil SpillsImage: NASA—the slick approaching Louisiana