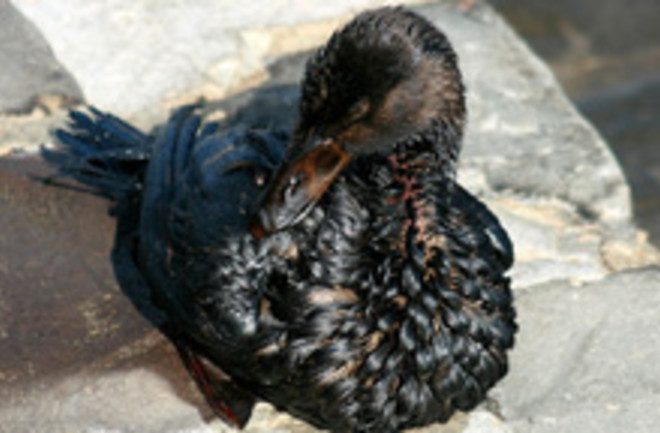 Twenty years have passed, and oil from the Exxon Valdez spill still taints Alaska’s shores and waters: roughly 21,000 of the original 11 million gallons remain, and have spread up to 450 miles from the spill site in Prince William Sound. A report by the Exxon Valdez Oil Spill Trustee Council—a state and federal partnership formed to oversee ecosystem recovery efforts—lists nine species, including the bald eagle, as fully recovered, but many of the area’s fish populations remain low. Sea otters and harlequin ducks continue to die because they dig for food in the sand and release buried oil, pockets of which remain buried in small portions of the intertidal zone hard hit by the spill. Seven distinct species, including sea otters, killer whales and clams, still are considered to be "recovering" from the initial effects of the oil [Seattle Times]. The initial death toll was estimated to include 250,000 seabirds, 4,000 sea otters, 250 bald eagles, and more than 20 orca whales [National Geographic News], according to the World Wildlife Fund. The herring population, upon which many of the area’s fishermen depended, has not yet recovered. And mysteriously, the resident killer whale pod in Prince William Sound has shown signs of "unusual social breakdown." First, several females disappeared, leading to a loss of about half the pod’s newborn calves, and [this was followed by] the highly unusual defection of one matrilineal group to a different pod, never before seen among orcas in the North Pacific. The region’s transient killer whales, meanwhile, "show no signs of recovery and continue to decline" [Los Angeles Times], according to the Trustee Council's report. The official cleanup effort ended in 1994, at which time experts thought that what remained of the spill would fully disappear in another few years. But one expert said that clean-up and recovery of oil has never been successfully accomplished in rough, ice-laden Arctic water [Reuters]. And Prince William Sound is a closed system—it's not exposed to big, pounding waves, so the oil has time to seep into the sand…. In these stagnant areas, oil-munching bacteria don't receive the nutrient-rich water flow they need to thrive [

]. Environmental chemist Jeff Short said that the remaining oil "has not biodegraded nearly as much as we thought it would." What’s more, data by his group at NOAA (and others) have shown that the oil in these long-lasting deposits still possesses what Short describes as "a substantial complement of its original toxicity...." Much of that residual toxicity traces to what he calls nasty three-ring polycyclic hydrocarbons, such as phenanthrene [Science News]. The design of the vessel itself has also been a point of discussion: The Exxon Valdez spill occurred from a single-hull vessel, which the EU has said is more "accident-prone" than double-hull vessels. Had the supertanker been fitted with a double hull, the scale of any spill would have been reduced [Bloomberg].

In 1990, Congress passed the Oil Pollution Act, requiring oil tankers in the region to have double rather than single hulls... The last single-hull boat is expected to go out of service by 2012, says Stan Jones of the Prince William Sound Regional Citizens' Advisory Council [US News and World Report].

Related Content: DISCOVER: Whatever Happened To... the Exxon Valdez? DISCOVER: Arctic Land Grabs Could Cause Eco-Disaster 80beats: “Nanosponge” Could Soak Up Oil Spills