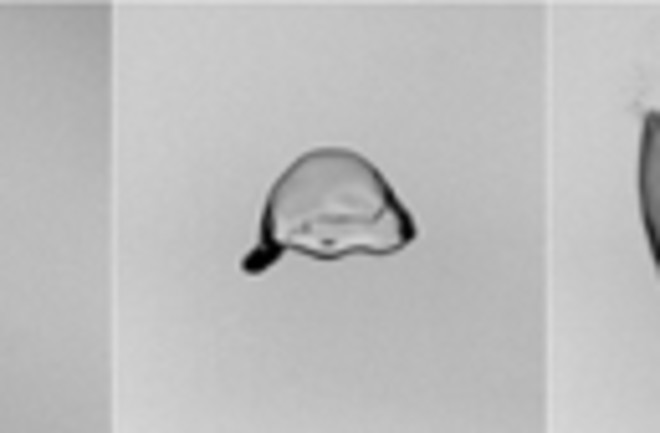 The pitter-patter of raindrops on your umbrella is caused by raindrops of all different sizes, and now physicists have a new explanation for how those raindrops form. A pair of researchers used a high-speed camera (video below the jump) to watch a single drop of water fall and change shape over the course of six-hundredths of a second, and found that the shattering of single raindrops after they leave clouds is enough to explain the wide variety of drop sizes [Science News].

Previously, the leading theory to explain the diversity of raindrops had been that raindrops grow as they gently bump into each other and coalesce. Meanwhile, more forceful collisions break other drops apart into a scattering of smaller droplets. All this action would explain the wide distribution of shapes and sizes [ScienceNOW Daily News]. But lead researcher Emmanuel Villermaux says he questioned that theory, with its supposition of frequent collisions. Real raindrops are so sparse, he said, that it is likely a drop would “fall on its own and never see its neighbours” [BBC News].

For the experiment, reported in a study published in Nature Physics, the researchers trained the camera on a single drop falling from a faucet. Though the drop fell only a few meters, the researchers applied an upward air current to simulate the experience of a raindrop during its long fall from the sky [Science News]. The air resistance first flattened the drop like a pancake, and then caused it to balloon upwards like an inflating parachute. Soon the air resistance overcame the cohesive forces keeping the drop together, and the parachute exploded into many tiny fragments. The size distribution of those fragments matched the diversity of sizes found in a rain shower, the researchers found.

But atmospheric scientists say they’re not yet ready to abandon the old model, and say they’re unconvinced by the new study. Regardless of who’s right, the work isn’t likely to see application any time soon. Villermaux says the findings are unlikely to aid weather forecasting or climate modeling, for example. “It’s just for the pleasure of understanding” [ScienceNOW Daily News], he says.