Before and After Satellite Images Show Devastating Floods

This animation consists of two false-color satellite images acquired before and after recent storms had caused devastating flooding in the United Kingdom. In this color scheme, water appears black. (Images: NASA. Animation: Tom Yulsman) Two days ago, I put together an animation highlighting the severity of California's epic drought. Today it occurred to me that I could do something similar to show what the devastating floods in the United Kingdom look like from space. The animation above shows what I came up with. It consists of two false-color images of part of England captured by NASA's Terra satellite, the first on Nov. 10, 2013, and the second on Feb. 16, 2014 — after the U.K. had been lashed by repeated storms. I chose this particular false-color scheme (the MODIS instrument's 7-2-1 combination) because of the way it handles vegetation and water. Vegetation turns up very bright green, and water black. The resulting contrast does a great job of showing flooding. One of the flooded areas is called Somerset Levels. Located in southwestern England, much of the land here is barely above sea level. Once marshlands, they've been drained for use in agriculture. But as NASA's Earth Observatory put it in a post yesterday, "the marshy character of the land still reasserts itself on occasion." As it has apparently done here, with a vengeance. In the image from Feb. 16th, areas that had previously been just green suddenly turn black. By mid-February, in fact an estimated 66 square miles of land had flooded, and 150 homes were swamped. Look elsewhere in the image and you'll see the same effect. The Earth Observatory featured an interactive before-and-after graphic which shows the Somerset Levels area closer up than my animation above. Here's a screenshot: 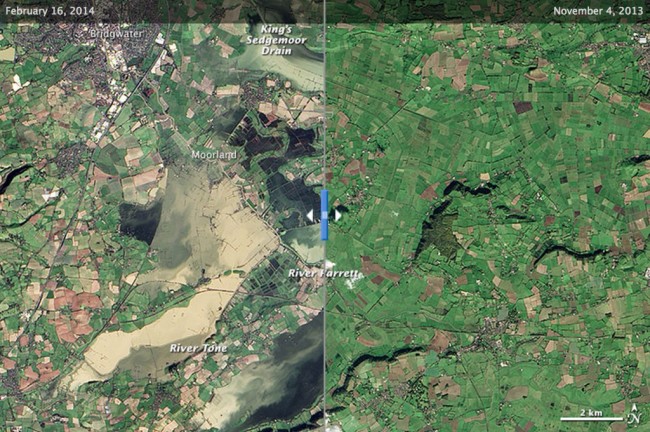 Source: NASA Earth Observatory The most recent image is on the left. It's also from this past Feb. 16, but this one was captured by the Advanced Land Imager on NASA’s Earth-Observing-1 satellite. The comparison image on the right was acquired by Landsat 8 on November 4, 2013. To use the interactive slider, click on the image. You'll exit this post and head over the Earth Observatory site. But please make sure to come back!