This animation of Landsat images shows the shrinkage of Lake Shasta in California. One is from December of 2000, an average year for precipitation. The other is from two weeks ago. Click for a larger version. (Source: USGS/Landsat) The pink bathtub ring that turns up around Lake Shasta in this animation of satellite images tells the tale as well as any numbers can: California is bone dry — drier than it has ever been since record-keeping began. We'll have to wait a couple of weeks for the official year-end precipitation numbers, but there is no question that 2013 will rank as the driest year in the state since recording-keeping began in 1894. From the start of the year through the end of this past November, 2013 brought an average of just 7.01 inches of precipitation to California. That's a whopping 11.88 inches below normal, according to the National Climatic Data Center. According to the most recent report of the U.S. Drought Monitor, nearly 95 percent of California is in drought, with 27 percent experiencing extreme drought. 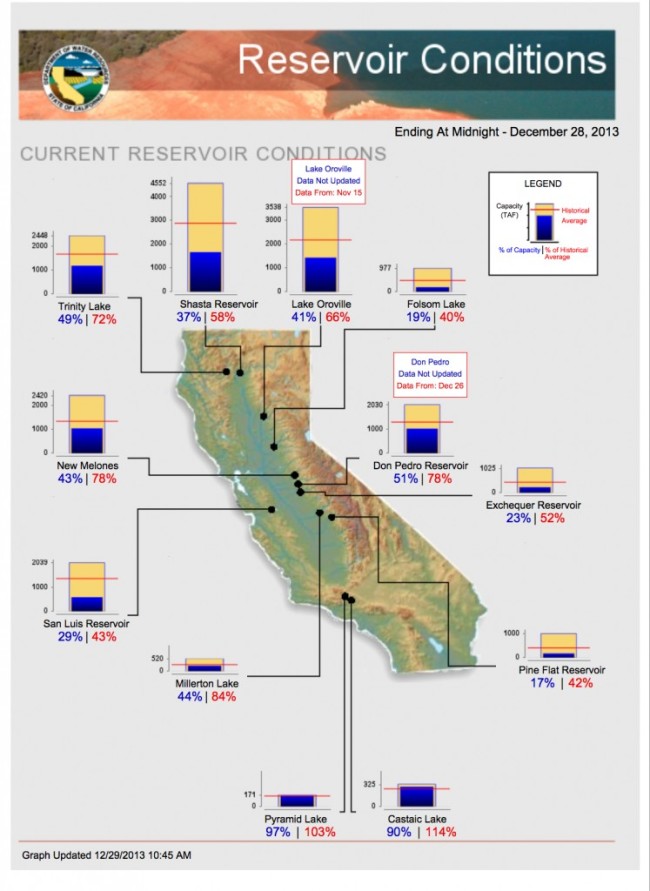 Source: California Department of Water Resources Thanks to the dry conditions, Lake Shasta, a large reservoir at the northern end of the parched Central Valley, is currently at just 58 percent of average for this time of year (and 37 percent of its total capacity). The shrinkage of the lake has left a pinkish ring that's visible in the second of the two images that comprise the animation above. The first image was captured by Landsat in December of 2000, when the reservoir's level was about average. Of 12 major reservoirs in the state, the levels of 10 are below average for December. Some are very significantly below average. For the details, click on the graphic to the right. The lowest is Folsom Lake in the foothills of the Sierra Nevada mountains just west of Sacramento: It stands at less than 19 percent of capacity. This has triggered mandatory water conservation measures in the city of Folsom. The City of Sacramento, California's capitol, may be next. Unfortunately, the outlook from now through the end of March — the heart of the wet season for California — does not look encouraging. 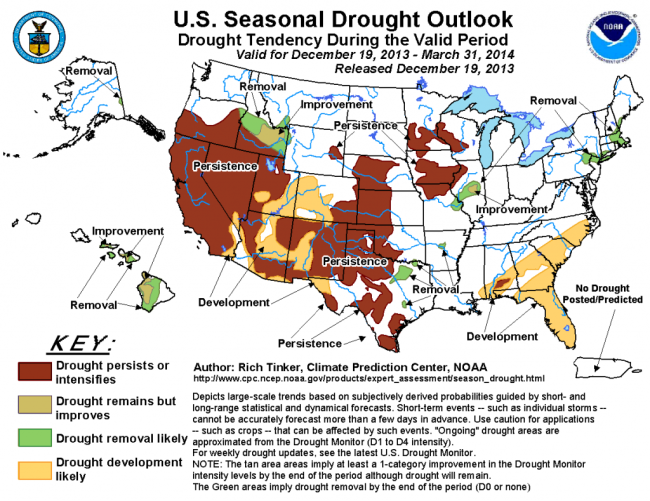 Source: U.S. Climate Prediction Center As the map above shows, the forecast from the U.S. Climate Prediction Center is for drought to persist through much of the western United States, and virtually all of California, now through the end of March. California Governor Jerry Brown has formed an interagency task force to consider a formal statewide drought declaration. (Given what this map shows, I'm wondering what they're waiting for.) If the outlook turns out to be correct, this will be the third straight dry winter for California. And it would significantly raise already high wildfire risks in the state. In mid-December, the bone dry conditions contributed to a devastating wildfire near Big Sur that destroyed dozens of homes and burned more than 900 acres. By spring, if not sooner, we should probably expect more of the same.

Whatever Happened to the Hole in the Ozone Layer?

20 Things You Didn't Know About Glaciers