Antarctica Is Definitely Feeling the Heat From Global Warming 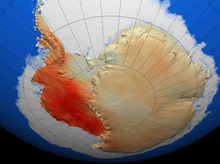 Researchers say they have an answer to a question that's been befuddling climate scientists for years: Was it possible that Antarctica, alone among the earth's seven continents, wasn't feeling the effects of global warming? As recently as 2007, the Intergovernmental Panel on Climate Change declared that the jury was still out on the question, but now, finally, researchers say they have conclusive proof that the icy southern continent is also heating up. In October, a separate group of researchers came to much the same conclusion using computer models, but the new study bolsters previous research with empirical evidence. The confusion over conditions in Antarctica arose mostly from strange weather patterns created by ozone depletion in the Southern Hemisphere, and allowed "climate skeptics" who deny the existence of global warming to use the continent as a talking point. Scientists

had long thought that while some isolated parts of Antarctica had been warming, much of the continent had been cooling over the past 50 years. But the new analysis found that since 1957, when measured as a whole, the continent's temperature has risen about 1 degree Fahrenheit. "The thing you hear all the time is that Antarctica is cooling — and that's not the case," says study lead author Eric Steig [USA Today].

Researchers used data from satellites and automated weather stations to put together the most complete picture ever of the Antarctic climate over the past 50 years, and published the results in Nature [subscription required]. While East Antarctica has shown little change and has cooled slightly in some patches, the researchers say that

West Antarctica, separated from the far larger eastern part by the towering Transantarctic mountain range, has long evidenced a strong warming trend. And the Antarctic Peninsula, warmer than everywhere else in the western region, is where massive ice shelves have collapsed into the sea as springtime temperatures rise above the melting point there [San Francisco Chronicle].

In fact, scientists on that peninsula say a major ice shelf is poised to break away from the continent at any moment.

David Vaughan from the British Antarctic Survey is on the peninsula right now, keeping a worried eye on the Wilkins Ice Sheet. It was once larger than Connecticut but soon could be gone entirely. "We landed on the ice shelf just two days ago — flimsy looking piece of ice — and that appears to be hanging on by the skin of its teeth," Vaughan says. It could collapse any time in the next few weeks, he says [NPR].

The enormous ice sheet isn't expected to raise sea levels dramatically even if it melts away entirely, but it's a dramatic example of the changes taking place at the bottom of the world. Related Content: 80beats: 2 Trillion Tons of Polar Ice Lost in 5 Years, and Melting Is Accelerating 80beats: New Study: “Humans Are Responsible” for Warming Even Antarctica DISCOVER: The Ground Zero of Climate Change is the West Antarctic Ice Sheet Image: NASA / E. J. Steig