New Study: "Humans Are Responsible" for Warming Even Antarctica 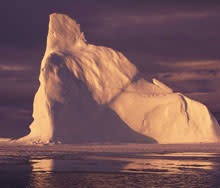 A new analysis of Antarctic weather conditions has found that human-caused global warming is to blame for the changing climate at the south pole, according to a new study.

In its landmark Fourth Assessment Report, the Intergovernmental Panel on Climate Change (IPCC) declared in 2007 that human influence on climate "has been detected in every continent except Antarctica" [Nature News].

Now, researchers have evidence that even that final frontier is feeling the heat from human activities. In the study, published in Nature Geoscience [subscription required], researchers compared 100 years of Antarctic and Arctic climate records to the results of two sets of computerized climate models.

Both sets factored in the effects of natural phenomena, such [as] volcanic eruptions and solar sunspot cycles, but only one set factored in the consequences of human activities that can affect climate, such as rising levels of the greenhouse gas carbon dioxide and fluctuations in the amount of ozone in the stratosphere. It was the models which included human factors that most closely matched the temperature profiles recorded at the poles. "For me, it can't be more clear that human activity is responsible" [New Scientist],

The report may go some way towards silencing climate skeptics who point to evidence that most of Antarctica has been cooling for some time. "There is strong warming in the Antarctic peninsula," Karpechko said. "But for several decades there has been a slight cooling of the rest of the continent. This slight cooling is due to circulation changes which are partly caused by ozone depletion. This is why there has been a bit of confusion as to what is happening in Antarctica" [CNN].

But as the ozone layer continues to recover, Karpechko says, the warming trend for the entire continent of Antarctica will grow more obvious. Global warming could have drastic impacts on the creatures that inhabit Antarctica's icy landscape, and could impact the rest of the planet as well: Higher temperatures could melt ice sheets and cause a dramatic rise in sea levels. But while Karpechko says the findings ought to act as an alarm bell, he also doesn't expect everyone to be convinced.

"Some people are waiting for the science to say that a particular heat wave is caused by humans. But attributing specific effects to human activities is much more difficult than attributing global changes. I don't know if we should wait for that because it will be too late. I see from the data that there is warming. This is really frightening" [CNN].

Related Content: 80beats: Expedition Sets Off for Antarctic Mountains That “Shouldn’t Be There” 80beats: Forget the Press Coverage: Conflicting Reports on Rising Oceans Are a Fake Controversy DISCOVER: The Ground Zero of Climate Change is the West Antarctic Ice Sheet Image: Sandy Briggs