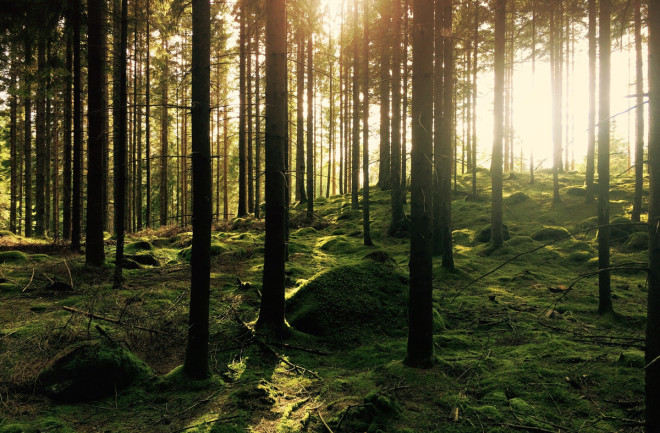 (Credit: Gustav Gullstrand/Unsplash) Antarctica, a land of near-lunar desolation and conditions so bleak few plants or animals dare stay, was once covered with a blanket of lush greenery. The conception of the ice-coated continent as a forested Eden emerged in the early 1900s when Robert Falcon Scott, a British explorer, found plant fossils during an expedition to the South Pole. Now, researchers working in the Trans-Antarctic mountains, where they may be the first to tread for hundreds of millions of years, are digging deeper into the Antarctic's deep past. Their work is revealing that not only was Antarctica home to greenery, it was veritably cloaked in it.

University of Wisconsin-Milwaukee geologists Erik Gulbranson and John Isbell were part of a team that traveled to the remote mountain range during the Antarctic summer last year to search for evidence about the continent's more lively past. The mountains are one of the few places in Antarctica where rock is exposed, giving geologists and paleobotanists a rare chance to dig for fossils. Even more exciting for them — some of the rock formations date back to right around the end-Permian extinction, a still poorly-understood event that killed off over 90 percent of the world's marine life and is the largest extinction event we know of. During their work last year, Gulbranson and Isbell found the remains of 13 fossilized trees dating to around 260 million years ago, about 8 million years before the end-Permian extinction. Prevalent among them is one species of tree, Glossopteris, that's thought to have dominated the landscape during that time. It's a species of tree that had both seeds and long tongue-shaped leaves that likely fell off at the end of the summer. In the Permian Antarctic, Glossopteris was king. Forests of the trees likely stretched across the entire continent, and well into South America, Africa, India and Australia as well. These disparate landmasses were once all part of an ancient supercontinent known as Gondwana. Glossopteris, in fact, was the first real evidence that Gondwana existed. The same tree could only have shown up in so many different places around the same time if they were connected by land.

Living in Antarctica, though, the species was subject to conditions no tree today faces. Six months of light alternated with six months of darkness. That means the trees' needed to find a way to survive without nourishing sunlight for half the year. But some of the preserved trees show some astonishing detail, offering clues as to how they pulled through. These clues come in the form of tree rings and even individual cells preserved in the fossils. Trees today go through cycles of growth and rest, tuned to the seasons, and the difference shows up in the cells — bigger when growing, smaller when resting. There's no such distinction among the Glossopteris says Patty Ryberg, a paleobotanist at Park University and member of the team. "In Antarctic trees they're all big cells," she says."They’re just running and running and running without stopping for six months so we’re trying to figure out how they grow down there." Around 252 million year ago, the once-mighty species disappeared as the end-Permian extinction closed its gaunt hand over countless species of that era. The culprit was likely one we're familiar with today: climate change. Scientists think that volcanic activity in what is now Russia, in an area known as the Siberian traps, pushed enough CO2 into the atmosphere to warm the planet and change the oceans beyond what most life could adapt to. The environmental consequences were severe enough that scientists think it took some 10 million years for life on Earth to recover, and the Glossopteris trees were likely wiped out. Studying fossils from both right before and right after the event, along with rocks that may give clues about the environment at the time, gives researchers an idea of how the extinction happened and just how widespread it was. Ryberg and Isbell are currently in New Zealand, waiting for inclement weather to lift so they can continue on to Antarctica. Gulbranson will follow in a few weeks, and they plan to return to the Tran-Antarctic mountains once again. In the cold and loneliness, they'll be walking among the ghosts of a forest long dead, searching for evidence of greener days.