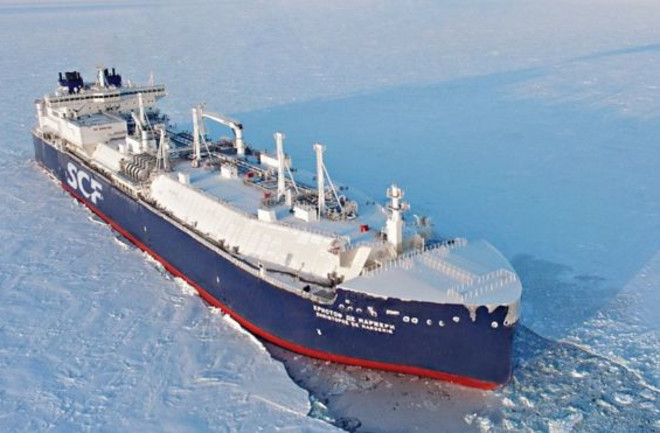 The Christophe de Margerie. (Credit: Sovcomflot) A Russian tanker ship has traversed the Arctic Ocean without the help of a separate icebreaker, marking a first for the Northern Sea Route. The Christophe de Margerie made the journey from Norway to South Korea in 23 days carrying a shipment of liquefied natural gas (LNG), opening up the frigid route to sustained shipping traffic. Ships normally travel through the Suez Canal to reach Asia from Europe, a trip that takes some 30 percent longer. The ship, which has a reinforced hull allowing it to travel through ice up to seven feet thick, is the first of 15 planned tankers to take advantage of retreating sea ice in the Arctic.

The ship is owned by Sovcomflot, a Russian company specializing in fossil fuel transport, and will support a new LNG mining operation on the Yamal Peninsula in Siberia. As warming oceans have opened up Arctic waters, Russia has been aggressively pursuing mining operations in the region. Growing Asian markets have made the prospect of a short sea route lucrative, and changing conditions are making it feasible. This marked the ship's first trip carrying a full load of cargo — it had previously made a trial run this past spring. Ships have completed the journey, which runs along the northern Russian coast, before, but only in the company of an icebreaker, and usually only between July and September. The updated fleet will make it possible to continue shipping year-round. The move signals that energy companies expect sea ice retreat to continue, opening up further opportunities for resource extraction and transportation. Climate models certainly back that notion, as sea ice extent has been on a downward trend marked by spikes of extreme warming for at least the past decade, spurred, ironically, by the very fossil fuels that these ships will be carrying.

Oil Under That There Ice

The undiscovered reserves in the Arctic are estimated at around 90 billion barrels of oil, 17 trillion cubic feet of natural gas and 44 billion barrels of natural gas liquids, much of which is located in Russian territory. Russia estimates that shipping traffic will increase by a factor of 10 by 2020. Shipping in the region hit a peak in 2013, and has been on the decline ever since — though that could now change. All of that motion in the ocean comes with potential dangers to the environment and to wildlife. Cargo ships can leak fuels into the environment, and give off sooty emissions that can increase ice melting rates. Increased shipping traffic poses a threat to marine wildlife as well, both through increased noise levels and the threat of collisions. This is on top of the inherently dangerous task of punching through thick ice floes in extreme conditions. On the bright side, icebreakers are less likely to suffer damage at sea and spill millions of gallons of fossil fuels into the ocean, as almost happened in 2013, when a ship was struck by ice in the Matisen Strait and had to be rescued. The shorter journey also uses less fuel, although an uptick in shipping in the region would certainly offset that benefit.