A Fleet of Professional Storm Chasers Will Study Tornado Genesis 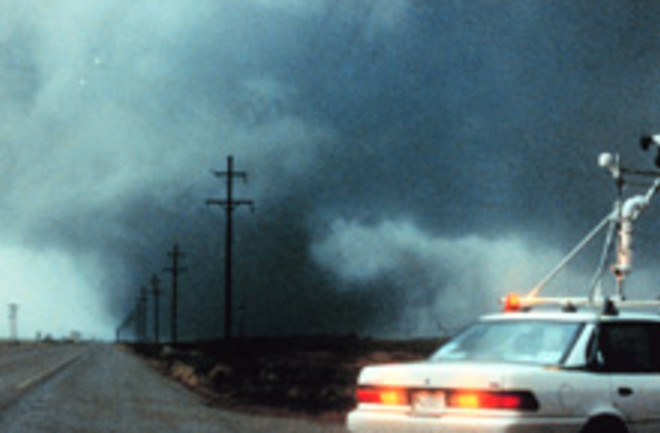 Next month, meteorologists will fan out across the U.S. prairie to chase storms, and to try to catch tornadoes in the act of forming.

Pulling together truck-mounted radar, UAVs, wind meters bolted to car roofs, webs of stationary sensors and a generous dash of adventure, 100 scientists with 40 vehicles will spend a month tracking the huge formations of clouds called supercells that occasionally spawn twisters. From a mobile field command vehicle, this army of scientists will conduct a data-gathering war on nature's baddest storms [Wired].

This ambitious effort from the National Oceanic and Atmospheric Administration (NOAA) and the National Science Foundation (NSF) aims to discover exactly what turns a fierce thunderstorm into a twister. The project, called Vortex2, follows the first Vortex project in the mid-1990s, which documented the entire life of a tornado for the first time. The new project will include

"more detailed sampling of a storm's wind, temperature and moisture environment, and lead to a better understanding of why tornadoes form — and how they can be more accurately predicted" [AP],

says the NSF's Stephan Nelson. The urgent need for better prediction was demonstrated just last night, when a tornado ripped through the Arkansas town of Mena, killing three and demolishing houses, churches, a factory, and even the town's city hall. The work will begin in May and will cover 900 miles of the central United States, from South Dakota down to the Texas panhandle. Researchers say that twisters form in large thunderstorms when these

storms tend to start rotating horizontally, but rising warm air moves up through the center of the storm, changing the axis of rotation and creating a vertically rotating column of clouds. But what turns that "rotating wall cloud" into a tornado is a bit of mystery [Wired].

The researchers will use 10 different types of radar systems to penetrate the storm and study the distribution of precipitation inside the clouds. Other vehicles will drive close to the epicenter of the action with wind and temperature sensors in an effort to crack the twister code, while unmanned aerial vehicles cruise the skies. Related Content: DISCOVER: The World's Biggest Tornado Hunt 80beats: Insurance Co. Blames Global Warming for an Especially Disastrous Year DISCOVER: Harnessing the Weather wonders whether technology can wipe out "acts of God" DISCOVER: Life in a Whirl showcases the organisms that make a home inside a vortex Image: NOAA