World's Most Sensitive Dark Matter Detector Gets a Boost 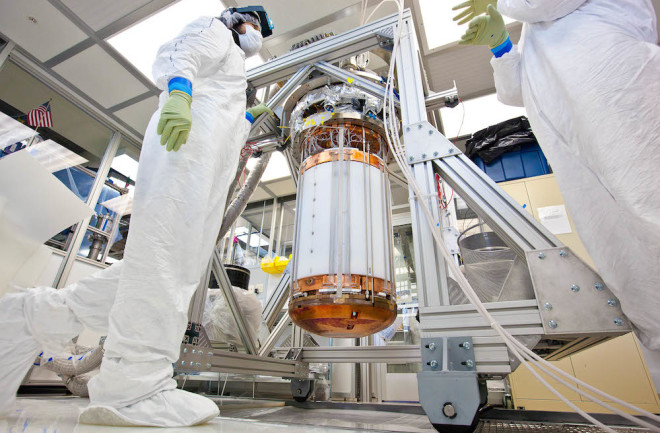 Scientists assemble the LUX dark matter detector. (Credit: Matthew Kapust/Sanford Underground Research Facility) One truism for me that I suspect holds some tiny bit of general truth for many across the broad, beautiful swath of humanity is that the longer I live the more history compresses. Today the work Brahe, Kepler and Galileo did to understand the geometry of the solar system doesn’t seem as distant to me as the scenes from Happy Days did shortly after we landed on the moon. When I teach astronomy and physics I circle back to certain ideas repeatedly. One of these ideas is related to the evolving sense of the flow of time, wherever it may slip. This concept centers on my need to get students to come to terms with the notion that the ideas in their textbooks got there as a result of real struggles by real people. As clear and obvious as the textbook physics may appear, it almost assuredly was a dirty mess at the time. I am reminded of these things by the latest reports from the LUX dark matter experiment that’s looking for evidence of the Weakly Interacting Massive Particles (WIMPs), which are likely to constitute the dark matter filling the universe. The LUX detector consists of 815 pounds of liquid xenon located about a mile underground in the former Homestake gold mine in South Dakota. The mine was the place where Ray Davis conducted the earliest solar neutrino experiments, experiments that led to his Nobel Prize in 2002. When a particle hits the xenon a flash of “scintillation” light is produced as well as electrons from ionized xenon. These electrons are “drifted” to a region where more light is produced.

A view inside the LUX detector. (Credit: Matthew Kapust/Sanford Underground Research Facility) There is still no detection of individual dark matter particles. Really, there couldn’t be. As reported in the paper submitted to Physical Review Letters, this latest work was simply doing a better job of calibrating the detector to better understand the two light signals produced, in turn to better reject the background from non-WIMP particles interacting in the xenon, of which there are many. Finding WIMPS amounts to searching for a very small needle in a huge haystack. The LUX scientists are now able to sift that haystack a little more thoroughly, leading to an increasingly stringent upper limit on the physical parameter space these particles could occupy. When applied to a 2013 observation run, this calibration work has significantly increased the sensitivity to low-mass WIMPs that have been the source of potential detections by others in the past.

The Search for Dark Matter

The story of our attempt to understand dark matter is a long one with Fritz Zwicky in 1933 measuring velocities of galaxies in clusters that were so high the clusters should have flown apart. Vera Rubin and her team in 1978 showed that the velocities of stars in individual galaxies should do the same for galaxies if the stars were not held in orbit by a stronger gravitational force than could be accounted for by the matter emitting visible light. At that point, the hunt for dark matter particles was on; it has produced confusing and potentially contradictory results intermittently since. Here is the latest image of excluded masses for WIMP particles as tweeted by @luxdarkmatter:

Here it is: re-analysis of the LUX 2013 data, with improved limits! https://t.co/XL8MvVxhGp submitted to PRL pic.twitter.com/lbvdqnwtcD

In 2016 the current detector will be decommissioned to allow construction of a bigger detector for future runs. This bigger detector, using the new calibration will push even further into WIMP parameter space, either detecting WIMPS or ruling out more models. As the limits keep getting pushed lower, we may need to re-think what might or might not constitute the dark matter that fills the universe. Even as detections appear to be made we need to proceed with caution. Experimental results are usually not actual news. It takes time for our understanding to evolve, to be recalibrated and to move us forward. Perhaps that list helps us recall that the hard work is in sifting the haystack just a little bit better and that generation after generation of scientists might need to keep resifting. Once I heard a quote, I don’t recall where, attributed to Alfred Wegener just before he perished in a blizzard. Wegener was the meteorologist who proposed the idea of continental drift, an idea resoundingly rejected at the time by geologists. It took many decades before it became a theory routinely taught to school children. The quote as I recall it: “Science is a social process. It happens on a timescale longer than a human lifetime. If I die, someone takes my place. If you die, someone takes your place. What matters is getting it done.” We can’t worry about time slipping into the future. All the time that has slipped into the past can be overwhelming when we look at the short time we have to solve whatever problem is holding our interest at the moment. All we can do is take another crack at the haystack in front of us.