Why We Didn't Visit Pluto Decades Ago 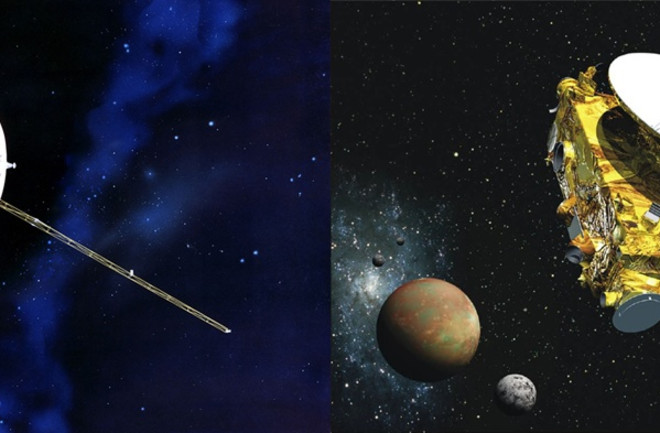 While many people know about the Voyager missions launched in the 1970s and the New Horizons probe that visited Pluto in 2015, few are aware that the relationship between these two missions dates back to the 1960s. Had scientific goals been different at the time, Voyager might have taken the place of New Horizons, decades before the latter was ever conceived.

In 1964, Jet Propulsion Laboratory (JPL) scientist Gary Flandro noticed that a so-called “grand tour” of the outer solar system would be possible in the late 1970s given the impending alignment of Jupiter, Saturn, Uranus and Neptune. Such an alignment is exceptionally rare and occurs only once every 175 years. In keeping with tradition and recognizing the difficulties inherent in using unmanned probes, two missions were planned to increase the chances of success should one mission fail: Voyager 1 and 2. Of key importance, Pluto (at that time formally considered a planet) was also in relative alignment and within reach of flyby explorations by both probes, albeit years after they would reach and survey the giant planets. These outer solar system explorations were made possible by the gravity assists that mission planners were incorporating into the flight plan: these maneuvers would use both the gravity and relative movement of each planet visited by the probes to alter their path and velocity to send them on their way to the next planet in line from the sun. According to the original plans, both probes would, in turn, visit Pluto.

Pluto's position in 1986 relative to the plane of the solar system made it impossible for Voyager 1 or 2 to visit the distant world. (Credit: theskylive.com)

Pluto’s position in 1986 relative to the plane of the solar system made it impossible for Voyager 1 or 2 to visit the distant world. (Credit: theskylive.com)

Throughout the 1960s and early 1970s, the Voyager missions underwent extensive revision and modification. Pioneer 10 and 11 served, to a large extent, as test platforms for outer solar system exploration, visiting Jupiter and Saturn. Pioneer 11’s images of Saturn’s moon Titan piqued the interest of many scientists, given its intriguing atmosphere. By the time the two Voyager missions were launched in 1977, interest in Titan had deeply affected mission planning, and Voyager 1’s mission had been heavily modified to allow a detailed analysis of Titan. This Titan flyby, however, took Voyager 1 below the south pole of Saturn and then north of the ecliptic (the plane of the solar system, which contains the planets — and famously, not Pluto — as they orbit the sun). This effectively eliminated visits to Uranus, Neptune, and Pluto. If Voyager 1 had not targeted Titan, the probe could have reached Pluto in 1986, twenty-nine years before New Horizons accomplished the same feat. Voyager 2 visited Jupiter, Saturn, Uranus, and Neptune. Explorations of Neptune’s moon Triton required a significant course correction for Voyager 2, and this also resulted in the probe trajectory moving out of (in this case below) the plane of the solar system. While the Triton encounter was highly valuable scientifically, it also eliminated the possibility of a Pluto flyby.

The Voyager program can only be called an unparalleled success; still, Pluto remained totally unexplored. Interest in a Pluto mission was high, and to fill this gap in our knowledge the so-called Pluto Fast Flyby mission was proposed in 1992. This mission, which was also known as Pluto Express and later Pluto Kuiper Express, was designed to incorporate two space probes that would be sent to Pluto and the Kuiper Belt. Sadly, this mission was ultimately cancelled in 2000 after almost a decade of planning. Two other similar proposals (Mariner Mark II and Pluto 350) were also cancelled along the way. This left Pluto completely unexplored years after Voyager 1 could have beamed back detailed images and information about what was at that time still considered the sun’s ninth planet.

By the late 1980s, scientists including Alan Stern and Fran Bagenal had created the Pluto Underground, whose goal was to promote (aggressively) the idea of a mission to explore Pluto in detail. There was some time pressure to undertake such a mission — thanks to its highly eccentric orbit and its position along it, planetary scientists were concerned that Pluto’s atmosphere would “freeze out” and snow down to the surface as it moved away from the sun, possibly as early as 2010.

Furthermore, Pluto’s axis is oriented such that its north pole was inclined towards the sun and if a spacecraft arrived too late, the southern hemisphere of the planet would be difficult to observe. Funding and administrative problems dogged plans for a Pluto mission, and the year 2000 came and went without any concrete mission on the books.

It was not until the end of 2001 that the New Horizons mission was approved for funding, and even this money was delayed by several years. New Horizons finally launched January 19, 2006, twenty years after Voyager could have reached Pluto. New Horizons arrived at Pluto nine and a half years later, providing a wealth of scientific data and spectacular views of Pluto and its satellites. Unlike the Voyager spacecraft, New Horizons was tailor-made for Pluto and in many ways provided better data about Pluto than Voyager ever could have, but it is fair to ask if we were right not to have sent at least one of the Voyagers to Pluto decades before.