Minor Doctor Who spoiler ahead. OK, yeah, it should be "woman", but that ruins the joke. But a whole bunch of blogs are talkin' about Michelle Ryan: 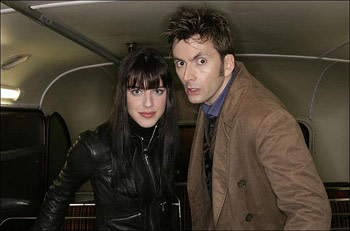 If she looks familiar, you may remember her from the awful "Bionic Woman" series which lasted about 1.3 episodes. She was also in "Jekyll", which was not bad, and in fact she was quite good in it. Incidentally, and probably not coincidentally, Jekyll was written by Steven Moffat, the new show runner for the good Doctor. Filming for Planet of the Dead, the next Doctor Who special, has started in Cardiff, and Ms. Ryan has been seen with The Doctor doing science-fictiony things like riding on a bus, standing around, smiling, etc. io9 has more, as does pretty much every other Doctor Who blog on the planet and off.