Who Were the Ancestors of the Neanderthals?

It's complicated. But researchers are gaining some clarity in the vast web of early-human species that preceded modern humans. 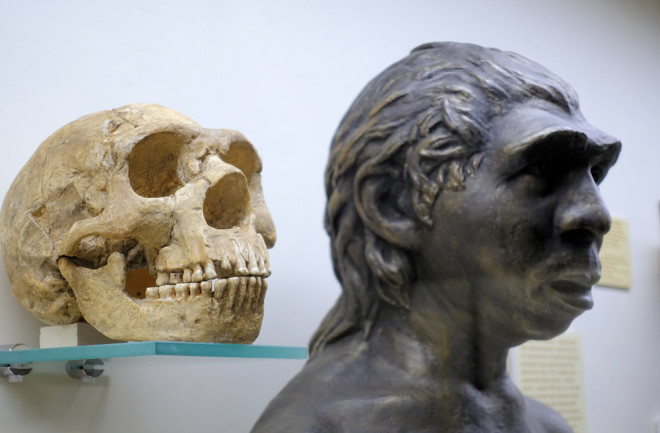 In the genus Homo, us sapiens stand alone today. Once we had an abundance of cousins: Neanderthals, Denisovans, Homo heidelbergensis, Homo erectus and others.

Our isolation makes it easier to assume that hominin history has led up to us — that various lines of human-like primates have evolved, had their chance in the sun and perished, leaving their more human-like descendants to approach the form of modern humans. Rudolph Zalliger’s infamous artwork The Road to Homo Sapiens, now more commonly known as The March of Progress, is commonly blamed for creating this perception in the minds of the public, though that was not what Zalliger himself intended.

But when paleontologists and anthropologists look back at the history of hominin evolution, they find a veritable Gordian Knot, one that weaves back into itself, with innumerable dead ends. For a clear example, consider our quest to learn who the ancestors of our closest relatives, the Neanderthals and Denisovans, were.

One Web, Many Threads

The Neanderthals are probably our most famous cousins: short, stocky humans who went extinct around 40,000 years ago, with some surprising theories as to why. Less-well known but equally relevant are the Denisovans. Remains were discovered in Denisova Cave (also called Aju-Tasch) in Russia in 2008, and genetic analysis revealed them to be very close relatives of Neanderthals. Closer than us, in fact. It turned out we had not one, but two closest relatives.

But who were the hominins that gave rise to the Neanderthals and the Denisovans? University of Utah anthropologist Alan Rogers, who specializes in population genetics and evolutionary ecology, has been working on this problem for over a decade. But a paper he published in 2017 in the Proceedings of the National Academy of Sciences (PNAS) led him down a new, unexpected course.

The paper analyzed all the new genetic data available on Neanderthals and Denisovans to advance our understanding of humanity’s demographic history. In the process, the researchers identified a bottleneck in the population of the ancestors of Neanderthals and Denisovans. Some researchers disagreed with those findings, arguing the paper had left out important data. That kicked off a back-and-forth through the pages of PNAS, Rogers says: “The result of it all was that it became pretty clear, once you added the additional pieces of data, that nobody’s models fit very well, neither ours nor theirs.”

Rogers wouldn’t have a satisfactory resolution to that puzzle until 2020. The models improved some after adding in various supplementary factors — such as the gene flow from older hominins, known as “super-archaics." Also, evidence of Acheulean hand-axes, which first appeared in Africa nearly 2 million years ago and then spread to Eurasia, suggested another possible explanation. What if ancient hominins, likely H. erectus, had colonized Eurasia as early as 2 million years ago — not just traveling there and dying out, but forming sustainable populations? Then the ancestors of the Neanderthals and Denisovans, the “Neandersovans,” as Rogers calls them, interbred with those hominins around 750,000 years ago. “Suddenly everything fit,” he and his co-authors wrote in their paper.

These Neandersovans, the researchers say, spread from Africa around 750,000 years ago and encountered their cousins, the super-archaics, likely descendants from Homo erectus. The groups interbred before dispersing across the continent, with Neanderthals later emerging in the West, and the Denisovans emerging in the East. “Exactly like what happened 50,000 years ago,” Rogers says, “when modern humans expanded, interbred, and separated into eastern and western populations.”

But nailing down who these earlier hominins were, or what they looked like, is extraordinarily difficult, for a number of reasons.

The single greatest problem is time. The oldest hominin DNA ever retrieved was 450,000 years old. Some research suggests that the upper-limit to retrieve sequenced DNA is somewhere in the range of 400,000 years to 1.5 million years. And while we know a fair bit about H. erectus, which likely formed some, if not all, of Eurasia’s super-archaic population 2 million years ago, those hominins had over a million years to evolve before they interbred with the Neandersovans.

And there are other basic questions that remain to be answered in this quest. For instance, where did the Neandersovan lineage branch off from the rest of the hominins in the first place? Was it in Africa? Or Eurasia?

The simplest answer, and the one that best fits the available evidence, says Rogers, is that they branched off in Africa. “It’s a story I can tell without too much moving back and forth between Africa and Eurasia,” he says. The genetic evidence supports this as well, since it appears that the ancestors of Neanderthals and Denisovans split off from the lineage that leads to modern humans, and modern humans are believed to have evolved in Africa.

While there are hominins that are good candidates to be representatives of Neandersovans after they interbred with the super-archaics of Eurasia, nailing those down is simply impossible, he says. Homo antecessor, a hominin that lived in what’s now Spain around 800,000 to 1.2 million years ago, could be one. “I would like to think it’s the hominin fossil that interbred with these Neandersovans. But I can’t know that. So there’s this ambiguity about the relationship between the genetics and the fossil record,” he says. Though, a protein analysis of the 800,000-year-old tooth enamel of a H. antecessor published last year lends his theory credence.

Perhaps H. heidelbergensis was modern humanity’s last common ancestor with Neanderthals. As Rogers put it, paraphrasing a colleague arguing with some paleontologists years ago, “paleontologists never know whether any fossil had descendants; but geneticists always know the fossils had ancestors.” There’s no guarantee the organism you’re looking at had any descendants at all, he explains, or that its species didn’t go extinct before any other species split off from it.

Further complicating the picture are discoveries of yet more hominins, and long-standing debates about how to even classify them. Some anthropologists argue that what is commonly called H. sapiens is actually composed of a number of different species. What makes us human has become as much a taxonomic problem as a philosophical one, especially for the time period 400,000 to 700,000 years ago. Rogers believes that is around when the Neandersovans would have interbred with the super-archaics and then branched off into Neanderthals and Denisovans. “The taxonomy of that time, I think, is confused,” he says. “Maybe I’m just confused. But I’m not comfortable with the taxonomy of that given part of history.”