Contenders for the title stretch back through the Enlightenment and the Renaissance to Ancient Greece. 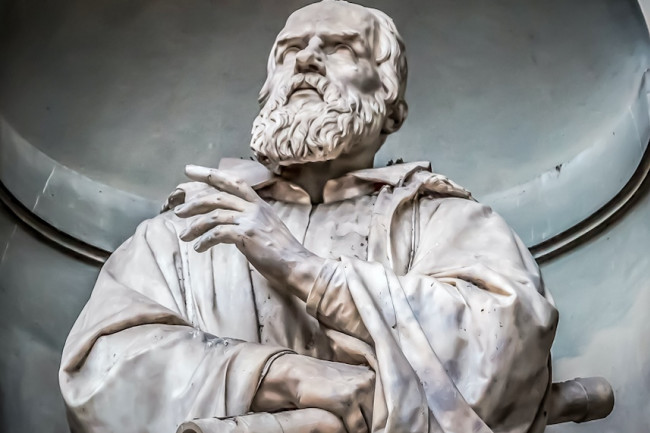 A statue of Galileo Galilei in Florence. (Credit: CIlia Baksheev/Shutterstock)

Over the past 2,500 years, countless people have advanced the enterprise of science. By UNESCO’s estimate, about 8 million of them were at the task in 2013. They are the latest generation in a long lineage of knowledge seekers — but is there anyone we can call their common ancestor? Is there, in other words, a first scientist?

To some extent, it depends what you mean by “scientist.” The word itself dates back only to 1834, when the philosopher William Whewell coined it as an umbrella term for the practitioners of an ever-expanding plethora of sciences. The academic ranks were full of chemists, physicists, naturalists and mathematicians (not to mention their proliferating subsets), and Whewell sought to unite them under this new name.

In the sense in which he meant it, and the sense in which we understand it today, the title of first scientist could arguably go to several of the discipline’s modern forefathers. Two noteworthy candidates are Roger Bacon, the medieval English philosopher who advocated experimentation, and Francis Bacon (no relation), who codified the scientific method 300 years later.

For many, Galileo Galilei’s famous studies of motion and the cosmos, plus his readiness to contradict religious dogma, make him the archetypal scientist. He built what was then the most powerful telescope in existence and used it to confirm the heliocentric model of the solar system, cementing perhaps the greatest scientific revolution of all time. Albert Einstein once called Galilei “the father of modern physics, indeed, of modern science altogether.”

Others feel that the honor belongs to earlier historical figures. Hundreds of years before any of the aforementioned Europeans, around the turn of the first century A.D., Ibn al-Haytham undertook an extensive study of light and vision. A Muslim born in present-day Iraq, he invented the camera obscura, and, as Bradley Steffens writes in Ibn al-Haytham: First Scientist, “was the first person to test hypotheses with verifiable experiments.” He was also a clear influence on Roger Bacon.

None of these men ever called themselves scientists, though. Rather, they were natural philosophers, not pioneers of some fundamentally new occupation, and as they saw it they embodied a tradition with roots in Ancient Greece.

Turtles All the Way Down

Broadening the notion of science a bit, some consider Aristotle its original proponent. He wasn’t much of an experimenter, and many of his conclusions were wrong — he believed women had fewer teeth than men, and that all matter consisted of the four elements, each of which sank or rose as needed to reach its proper place. But in The Lagoon: How Aristotle Invented Science, the biologist Armand Marie Leroi argues that Aristotle nevertheless exemplified the empiricism that has since produced so many marvelous discoveries. In his curious and colossal examination of the natural world, the spirit — if not all the modern principles — of science emerged.

Aristotle himself points even farther back in time, to his Greek predecessors. One of them, Anaximander, found a recent champion in the theoretical physicist Carlo Rovelli. In The First Scientist: Anaximander and His Legacy, he sets the inception of science at “Anaximader’s revolution”: the realization that the Earth is not supported by cosmic columns or a never-ending tower of turtles, as those before him assumed, but that the heavens continue underfoot as they do overhead.

To Rovelli, that achievement is no less significant than the Copernican revolution two millenia later and deserves the epithet his book gives to Anaximander. “If this reimagining of the world is a central aspect of the scientific enterprise, then the beginning of this adventure is not to be sought in Newton’s laws of motion, in Galileo’s experiments, or Francis Bacon’s reflections.”

But it’s possible to take one final step back in the history of science, to Anaximander’s own teacher: Thales of Miletus, one of the so-called Seven Sages of ancient Greece. He’s more often known as the first philosopher, but, again, philosophy and science are born of the same inquisitiveness.

It seems Thales had that in spades — he was interested in everything, from geography and mathematics to politics and history. According to Aristotle he was the first person to investigate the basic principles of matter, and the historian Herodotus writes that he predicted an eclipse in 585 B.C. (though no one knows how). But he could also wield his intellect for more earthly purposes, as Aristotle demonstrates in an amusing anecdote.

Thales lived in poverty, and the people of Miletus took this as proof of philosophy’s uselessness. To teach them otherwise, he used “his skill in the stars” to foresee a great olive harvest the coming year. He then bought all the olive presses in the region and, when the harvest came, “let them out at any rate which he pleased, and made a quantity of money.” Thus, Aristotle writes, “he showed the world that philosophers can easily be rich if they like, but that their ambition is of another sort.”

Like Aristotle, Thales didn’t get everything right. He claimed, for example, that “all is water.” But he’s important, above all, because he marked a shift from supernatural to natural explanations. After eons of divine intervention, of Zeus’s lightning bolts and Poseidon’s thrashing waves, Thales was the first to propose theories about the way the world works based on observation and reason — just as scientists do today. As far back as we can trace the intellectual heritage that culminated in modern science, it leads here.