Pioneer and pilot, Bessie Coleman was the first Black woman and first Native American woman to hold a pilot’s license. 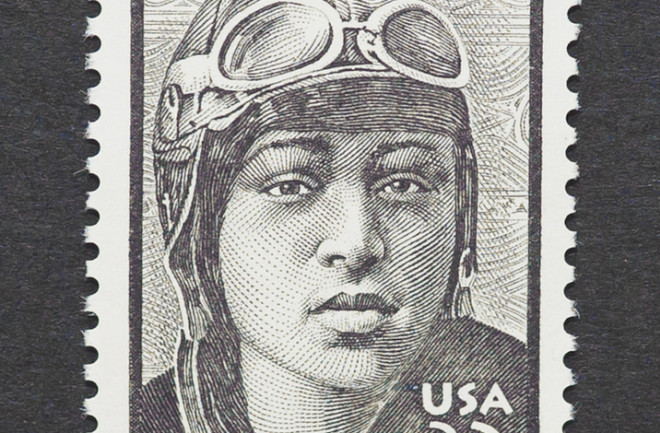 In early May of 1926, thousands of people stood outside a train station on Chicago’s South Side and waited as a casket was solemnly unloaded.A military regiment stood by to escort the dearly departed. In the coming days, an estimated 10,000 people attended services and paid their respect to the queen.

Bessie Coleman, or Queen Bess as she was known, was the first Black woman and first Native American woman to hold a pilot’s license. She dreamed of opening an aviation school and helping other excluded students learn how to become pilots.

Her life ended tragically in a crash, but her legacy lives on and continues to inspire aviators and astronauts.

Coleman was born in 1892 in rural Texas, and she was one of twelve children. Coleman’s father, who was 75 percent Native American, felt frustrated by the increasing restrictions from lawmakers in Texas and left the family for Oklahoma when she was seven years old.

Coleman’s older brothers moved on to Chicago, and she was tasked with caring for her younger siblings while her mother worked. Although she had to miss many days of school, she was a standout student. When she finished all eight grades of public school, she was one of the few Black students in Texas to do so.

She wanted to move on to higher education, and in 1910 she started at the Colored Agricultural and Normal University in Langston, Oklahoma. She lasted one term before she ran out of money and had to return to Texas and work as a laundress.

She saved for the next five years and finally had enough money to leave in 1915. She boarded a train heading north and planned never to return.

In Chicago, Coleman moved in with her older brother and his family on the South Side of Chicago. She trained as a manicurist and began working at a barber shop. There she heard stories of veterans returning from World War I, and she increasingly became interested in aviation and the idea of becoming a pilot.

No flying school, however, would allow Coleman to enroll. She was a woman, Black and Native American at a time when only white  men were permitted to train.

Coleman had made powerful connections during her time at the barber shop, including one with Robert S. Abbott, publisher of The Chicago Defender. Abbott encouraged Coleman to learn French and earn her pilot’s license in France.

Coleman saved and studied. And in November 1920, she boarded a ship for Europe.

Coleman initially met rejection in France. One school rejected her and stated they no longer trained women because two female students had recently died in accidents. Coleman persisted, and she found a spot at the Ecole d’Aviation des Frères Caudron in the Somme department in northern France.

In flight school, Coleman learned piloting and navigating skills as well as some aerobatic maneuvers that were popular in air shows.  She earned her pilot certificate in June 1921 from the Fédération Aéronautique Internationale and was the only woman that year to do so. The following year, she became the first woman to achieve an international pilot’s license.

The press surrounded Coleman when she returned to the U.S., and she was savvy enough to realize what good publicity could do. She adopted a uniform of aviator gear that she wore in the coming years to lectures and airshows, and she didn’t hesitate to pass out press kits and promote her accomplishments.

In the coming years, Coleman alternated between flying in air shows and speaking on the lecture circuit. She saved money and told the press she planned to open her own flight school so people shut out of pilot training could one day earn their wings.

During the height of her fame, Coleman returned to Texas for the first time since 1915. She performed in an airshow and insisted she would only fly if all attendees were allowed to enter through the same gate. If people of color were forced to enter through a side or back gate, then Coleman threatened to keep her plane on the ground. The organizers relented.

In May 1926, Coleman was scheduled to perform an airshow in Jacksonville, Florida. She arrived a few days early and spoke to local groups while a mechanic flew her plane, a Curtiss JN-4 airplane from Texas to Jacksonville. The plane was described by witnesses as “worn” and “poorly maintained.” The mechanic had to stop three times during the journey due to performance issues.

The night before she died, Coleman saw her friend, Abbott, at a restaurant. He was passing through town after visiting his mother, and he warned Coleman he didn’t like the Texas mechanic. Abbott urged her to not let the mechanic take the controls while she did parachuting stunts.

The next morning, Coleman and the mechanic did a test run over the airfield. The mechanic flew the plane while Coleman sat in the back seat. She unbuckled her seatbelt and peered out the side of the plane to determine where she could parachute safely.

After five minutes of circling at 80 miles per hour at 3,500 feet, the plane accelerated unexpectedly to 110 miles per hour. The plane fell into a nosedive and spiraled uncontrollably. Coleman was thrust from her seat, and witnesses say she somersaulted through the air before hitting the ground.

The public was devastated by the news of her death, and three funerals were held in her honor — two in Florida and then one in Chicago.

Coleman never realized her dream of opening a flight school, but her legacy lived on and inspired others. In 1992, Mae Jemison became the first Black female astronaut to go into space. And on her historic journey, she carried with hera picture of the queen, Bessie Coleman.