Where has the BA book been, Part IX: Seattle

It's been a couple of months (I've been busy, like I've said), but it's time once again for Where Has The BA Book Been. I have a couple of friends, fellow skeptics named David and Carol, who live in Seattle. I saw them again at TAM 5.5, and as usual I didn't have enough time to talk to them (despite the restaurant we ate at being incredibly slow; I suspect some of the customers who were there when we were are still waiting for their food). But we did talk about Seattle, and how I got sick there the last time (they came to a talk I was supposed to give, but a norovirus had other ideas, and that's still the one and only talk I have ever canceled). I also regaled them with a tale of the Central Market and the monkfish, and we all had a laugh. Obviously, they remembered that story. Hence the picture: 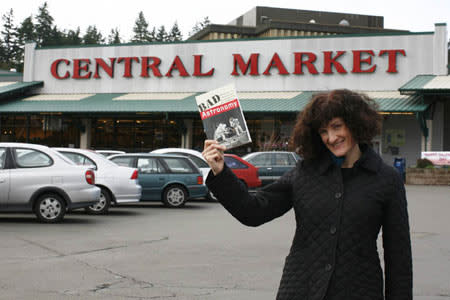 If you live in Seattle (or Austin), you need to shop at Central Market. They don't carry my book, but they do have the ugliest and scariest fish you can imagine. Oh, a postscript: David took this picture of me at TAM 5.5. It's not as bad as it looks.

So, do you own a copy of the book? Take a picture of yourself holding it in some fun location, send it to me, and I'll post it here!