Where Did the Universe's Antimatter Go? Scientists Inch Closer to Solving the Mystery

New particle accelerator data from the T2K experiment could finally tell us where all the antimatter went. 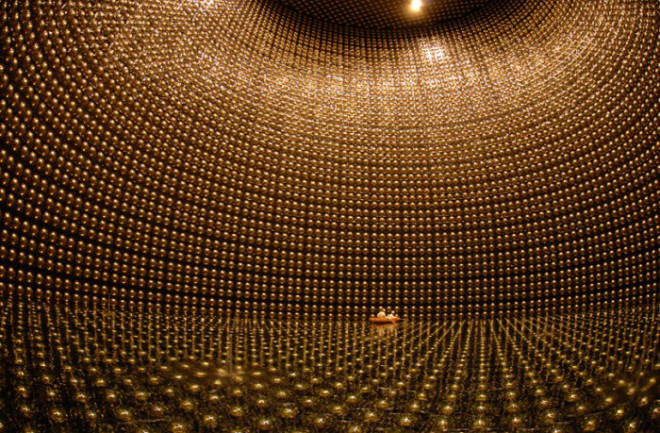 The K in T2K refers to Kamioka, Japan, where the Super-Kamiokande Detector resides deep underground. The detector uses this giant, water-filled cylinder to detect neutrinos shot from 180 miles away in Tokai — the T in the project’s name. Recent data show how neutrinos and antineutrinos change from one type to another — at different rates — as they travel. (Credit: Kamioka Observatory/CIR )

This article appeared in the June 2021 issue of Discover magazine as "The Search Goes On" Become a subscriber to support our science journalism.

In 1996, Discover reported on a new experiment that would probe the far universe for signs of antimatter. These particles are theoretically identical in behavior to the ones we know, but with opposing electrical charges, among other differences.

Physicists’ theories about the Big Bang say there should have been equal amounts of matter and antimatter created during the event. But we live in a universe full of matter, with little antimatter in sight.

There are different explanations for this, including that all of the antimatter might just be too far away to see. The search for distant antistars and antigalaxies was the focus of our April 1996 article, “The Antimatter Mission,” which chronicled the genesis of an experiment called the Alpha Magnetic Spectrometer (AMS). The experiment set out to measure cosmic rays to see if any of them came from antimatter.

The AMS has been running on the International Space Station since 2011, but it has yet to turn up much evidence for antigalaxies and the like. It could be that our universe is largely empty of antimatter, which poses another question: Where did it all go?

Scientists have long posited that slight differences in how matter and antimatter behave could have led matter to win out in the moments after the Big Bang. But finding those asymmetries has proved difficult. Now, physicists with Japan’s T2K experiment have published data that move us closer to an answer.

The Alpha Magnetic Spectrometer has been collecting data from the International Space Station since 2011, but has yet to turn up evidence for antimatter. (Credit: JSC/NASA)

T2K scientists are tracking a curious property of neutrinos, hard-to-detect particles that rarely interact with matter. Neutrinos change type, or flavor, as they travel — for example, muon neutrinos might turn into electron neutrinos.

The T2K experiment has been watching how both regular neutrinos and antineutrinos oscillate between flavors, and they’ve noticed there’s a slight disparity in how they behave.

The transition of a muon neutrino to an electron neutrino happens at a higher rate than that of a muon antineutrino to an electron antineutrino, says Mark Hartz, a particle physicist at Canada’s York University and co-author of a recent Nature paper on the T2K data. The data provide further evidence that there could be some slight asymmetries between normal matter and antimatter, perhaps enough to explain why the universe today is almost exclusively made of matter.

But Nobel laureate Samuel Ting, the principal investigator of the AMS experiment, says we need more data to truly say antimatter isn’t out there somewhere.

“This neutrino experiment only says, ‘From Earth, we observe in space more matter than antimatter,’ ” he says. “It does not say, ‘Antimatter disappeared.’ ”

Ting’s views may not represent the majority opinion among scientists, but the physicist is undaunted: “If you don’t look, then really you will never know.”