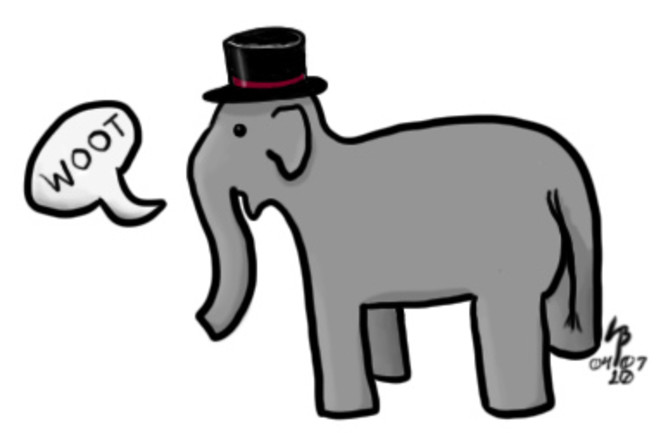 Photo: flickr/shaymus22Scientists are often mocked for their fanatical, and often obscure, obsessions. Take this study, published in the American Journal of Physics, for example. This paper describes in great detail how to draw an elephant using mathematical equations. The solution involves a series of clever tricks, a couple of Fourier series, and results in a fairly cute elephant (see below). But, you may be asking yourself, "Why an elephant?" Well, according to the authors of the study, this feat has been bandied about for a long time, but never actually achieved. "A turning point in Freeman Dyson’s life occurred during a meeting in the Spring of 1953 when Enrico Fermi criticized the complexity of Dyson’s model by quoting Johnny von Neumann: 'With four parameters I can fit an elephant, and with five I can make him wiggle his trunk.' Since then it has become a well-known saying among physicists, but nobody has successfully implemented it." Till now, that is!Drawing an elephant with four complex parameters. "We define four complex numbers representing the parameters needed to specify an elephantine shape. The real and imaginary parts of these complex numbers are the coefficients of a Fourier coordinate expansion, a powerful tool for reducing the data required to define shapes." Bonus table and quote:

Related content: Discoblog: NCBI ROFL: Effect on tipping of barman drawing a sun on the bottom of customers' checks.

Discoblog: NCBI ROFL: Drawing on your forehead for science.

Discoblog: NCBI ROFL: Cavemen were better at drawing animals than we are.