Protestors, activists and thieves often target art in museums, like the recent Van Gogh vandalism. But conservators use scientific methods to restore and protect beloved masterpieces. 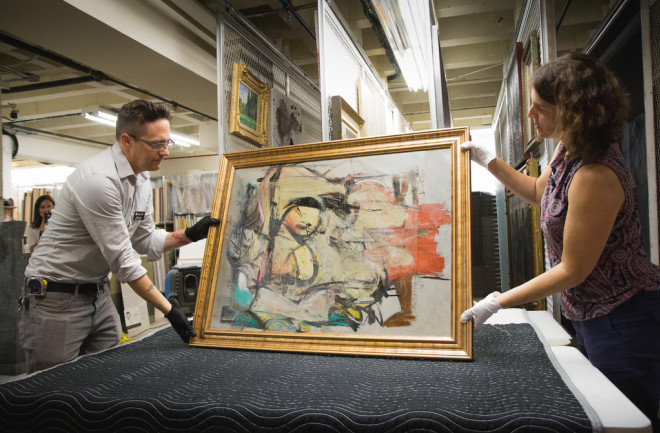 In October, two anti-oil protestors inside London’s National Gallery hurled tomato soup onto Vincent van Gogh’s Sunflowers painting. After the incident, you could almost hear a collective sigh of relief when news outlets reported that the masterpiece was unharmed.

In similar events, multiple other activists targeted beloved masterpieces earlier this year. It’s a type of demonstration that has persisted for more than a century, long before the seeds of social media and viral content. In 1914, also at London’s National Gallery, suffragette Mary Richardson slashed Diego Velázquez’s Rokeby Venus with a meat cleaver. In 1974, a man spray-painted “kill lies all” across Picasso’s Guernica at the Museo Reina Sofía in Madrid, Spain. The Mona Lisa is also no stranger to harm. People have flung acid, hot coffee, a rock and even cake in her direction.

Fortunately, many of today’s museums use protective glass to shield their most vulnerable masterpieces from such insults. When paintings do get damaged, however, it’s the work of conservators to restore them to their former glory.

Typically with a background in studio art, art history and science (such as chemistry and archeology), conservators undergo several years of training. This might involve academia, internships and fellowships as they refine their restoration skills.

To understand the art and science behind the craft, consider the painstaking restoration treatment of Willem de Kooning’s Woman-Ochre. This piece was finally displayed this summer after a theft, recovery and restoration project handled by the J. Paul Getty Museum’s Paintings Conservation Department in conjunction with the Getty Conservation Institute.

Read more: The Art You Like Reveals Your Personality Traits

The story of this painting’s dramatic before-and-after starts one fall morning in 1985. At the University of Arizona Museum of Art, two visitors walked in early. One of them distracted a security guard. The other strode to the room where Woman-Ochre hung.

The thief likely used a box cutter to slice through the perimeter of the canvas. With most works of art, this would have allowed him to easily remove the canvas. The de Kooning, however, remained firmly attached to the wall.

What the thief didn’t know: In 1974, conservators had fortified the painting with a second thicker canvas. Because the box cutter only sliced through the original top canvas layer, the thicker second canvas continued to hold Woman-Ochre in place.

To extricate her, the thief yanked and peeled downward, similar to how one might attempt to free the end of a roll of packing tape. As he did so, the paint cracked, flaked, and crumbled under the tension. Then, the thief likely rolled the painting face down, creating more tension as well as more damage, explains ​​Ulrich Birkmaier, senior conservator of paintings at Getty.

Years and then decades passed with no public knowledge of what happened to the prized work. Then, a few years ago, the owners of an antique store paid $2,000 for a collection of objects at an estate sale. Woman-Ochre was among the contents. It eventually ended up in the hands of Birkmaier and his team of conservators.

To undo the damage, ​​Birkmaier’s team would need to rejoin the canvas to its original border, remove its discolored varnish, press and adhere curled paint back into the canvas, fill deep gashes, and touch up the areas with missing paint.

The work began with high-powered microscopes and specialized X-ray equipment, which allowed the conservators to study the chemistry of de Kooning’s original pigments. One of the paints, they discovered, had been made from a rare red dye. It was sensitive to the solvents typically used to remove varnish. That was going to complicate their efforts.

After studying and mapping the painting, they used silicone-tipped dental tools to gently press each curled flake of paint back into the waxed canvas, sealing it in place with a tool that emitted warm air.

With this slow, painstaking work complete, it was time to use a gentle solvent to remove the discolored varnish while preserving the red dye. Then the conservators lined Woman-Ochre with its previous canvas border, affixing a lining to the back of the canvas to support the newly joined edges.

Finally, it was time to touch up the painting. Inert material was used to fill in lines and gaps. Working one millimeter at a time, using a microscope, they dabbed paint onto the canvas.

“It’s like solving a puzzle,” says Birkmaier. “We let the painting dictate the colors we use. The more we fill in, the more unified an area becomes and the more clues we have. We also don’t want to go too far because that would draw attention to the conservation treatment. We don’t want the painting to look new. We want to make it look old, as it did originally.”

All told, it took three years to clean, repair and restore the de Kooning. Though some of the painting’s scars can be seen if you look very closely, they’re not noticeable when standing at a typical distance. The restored artwork was on exhibition at Getty for three months, then it was returned to the University of Arizona Museum of Art where it is now on display.

As much press as protestors and thieves get, the most consistent threat to paintings is not people. It’s time.

Light can fade paint. Varnish oxidizes and discolors. Fluctuations in heat and humidity will expand and then contract a canvas, leaving behind cracks and flakes. For these reasons, museum rooms are typically kept at a consistent temperature (70 degrees) and humidity level (50 percent). Lighting is as low as possible, while still allowing visitors to see the works of art.

On top of that, conservators sometimes add a very thin sheet of specialized museum glass just behind a painting’s frame. Spacers separate the glass from the artwork, creating a thin pocket of air. In addition to protecting paintings from coffee, soup and other substances flying through the air, the glass seals in the humidity level, keeping it consistent.

“We are trying to provide the perfect conditions,” says Birkmaier. “Some of these paintings have already been around for hundreds of years. We are the caretakers of our generation, trying to help the paintings survive another 200, 300 years. It’s an awesome responsibility.”