When Hearts Beat as One

A large body of research has found that under a variety of conditions, human hearts tend to beat in synch. 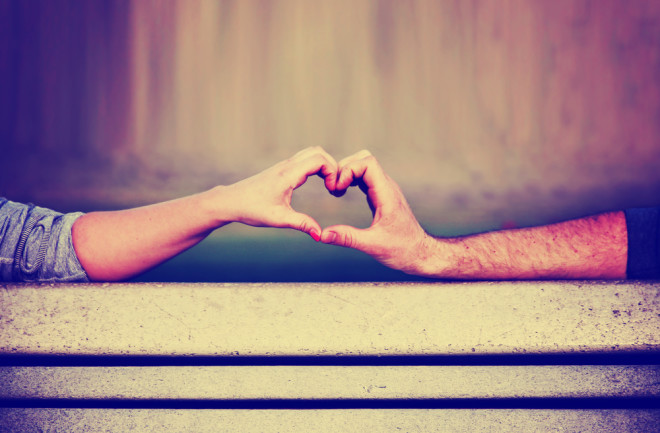 Humans may not always see eye-to-eye, and some may march to the beat of a different drummer, but when it comes to heart rates, we seem to have a strong tendency to synch up with each other.

Several years ago, in a study destined to make the rounds of Valentine’s day stories, researchers at the University of California Davis found that lovers’ heart rates synchronized when they were sitting quietly together in a room or across a table from each other. When the researchers mixed up the couples, so that each was paired with a stranger rather than their partner, heart rates did not fall into step.

This is just one of many studies exploring how human heart rates get in synch. Recent research found that the hearts of couples who really hit it off on a blind date fell into step as well. Nor is the effect limited to romantic partners. Total strangers’ heartbeats can synch up when absorbed in the same story, according to one recent study, or even, according to other research, when strangers simply trust one another. In yet another study, the hearts of mothers and their babies were shown to beat in time when the moms and babes played together (even when they were not physically touching).

The mechanisms for all this synchrony are still being studied. It’s likely that the reasons, as well as the mechanisms, will be found to vary from situation to situation, and from couple to couple. For example, take the research that found that people’s heart rates synched when listening closely to stories. The authors point out that the subjects’ heartbeats might have changed depending on the narrative content of the story, leading the authors to speculate that “factors intrinsic to the story, such as semantics and emotions, drive a synchronized heart rate.”

In her book Seven and a Half Lessons about the Brain, Lisa Feldman Barrett, a neuroscientist at Northeastern University, suggests that all this synchronizing is just a part of being a social species — and often a very advantageous part. “One advantage,” she writes, “is that we live longer if we have close, supportive relationships with other people... If you and your partner feel that your relationship is intimate and caring, that you’re responsive to each other’s needs, and that life seems easy and enjoyable when you’re together, both of you are less likely to get sick. If you’re already sick with a serious illness, such as cancer or heart disease, you’re more likely to get better.”

Unfortunately, studying the health of a relationship is much more difficult than measuring heart rates. Brian Gabriel Ogolsky is a psychologist who runs the Healthy Experiences Across Relationship Transitions (HEART) lab at the University of Illinois Urbana Champaign. He was searching for better ways to measure relationship quality. “A problem that's plagued the field,” he says, “is that there aren’t really any objective measures of relationship quality. Everything relies heavily on self-reports.” However, Ogolsky and his team realized there is something you can measure: proximity. So they designed an experiment to do just that.

Ogolsky and his team fitted 10 couples, aged 60 years and older, with sensors that tracked how physically close they were to their partners throughout the day. They then tracked the subjects for 14 days in their own homes. The couples also wore Fitbits. Each evening the researchers phoned the couples and administered a standard psychological and relational questionnaire that gathered information about stress, relationship quality, and other self-reported data so that they could compare the self-reported data to the couples’ proximity.

What did Ogolsky and his team find? You guessed it. As shown by the Fitbit data , the couples’ heart rates influenced each other, or as Ogolsky puts it, there is a “basic relationship dance between proximity and heart rate.” The study was too small, he says, to tell us muchm about how heart rate synchrony or proximity influenced the questionnaires. But it did show that the heart rate dance is not just about what’s going on in a given couple’s relationship, but what’s going on between partners this moment versus that moment, Ogolsky says.

So what does all this mean? Ogolsky doesn’t claim to have the answer, but he does point out that humans are extremely social creatures and that many studies are demonstrating that social isolation is bad for health. “There are a lot of people who argue that attachment is the fundamental human experience,” he says. “If you adopt that approach, one would argue that that connection starts at infancy. Then, over time, we shift our attachment from our parents to our peers and loved ones. And so there is a feeling of safety, a familiarity that triggers some kind of basic emotional or physiological response.”

In effect, science suggests that we need each other, and our hearts reach out to make that connection.