When a Giant Asteroid Impact Created Its Own Magma 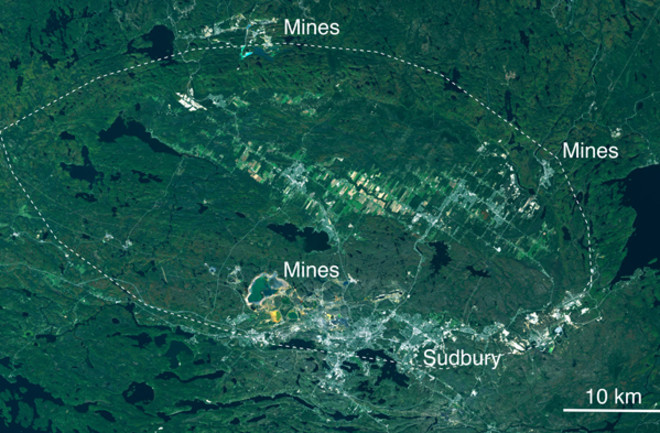 Landsat 8 image of the Sudbury Basin in Ontario, taken in September 2013.

USGS/NASA There are many ways we can form magma on Earth. Most of these processes involve the motion of the mantle and crust of the planet, creating places where hot mantle rock can decompress, like at a mid-ocean ridge, or where water coming off a piece of oceanic crust that is diving into the mantle lowers the melting point of rock, like in a subduction zone. These two processes -- decompression and flux melting -- are the main modes of generating the magma that drives volcanoes. However, occasionally very rare events like a massive asteroid impact can cause the rocks of the Earth's crust to melt and even cause volcanoes and magma bodies to form that may have lasted over 50,000 years. One of the best examples on Earth for this kind of cataclysmic volcanism in found in Canada. The Sudbury Basin in Ontario (see above) contains the remnants of a massive asteroid impact that occurred ~1.8 billion years ago. Today, the remains of the crater are perched up against some of the oldest rocks on Earth, namely the Canadian Shield, where the rocks are 2-2.6 billion years old. It is into these ancient rocks that the Sudbury asteroid slammed, creating what is thought to be a crater at least 200 kilometers across. All that remains today is an elliptical sequence of rocks ~50 kilometers across as most of the impact features have been long since eroded. However, this scar on the Earth's surface might also be one of its most valuable, with over $500 billion worth of nickel, copper, platinum-group and other rare metals in its deposits. Last week, our Denison University Geosciences field trip visited the Sudbury Basin and I got to see for the first time these results of this massive impact. You can find evidence for this impact in the rocks that surrounded the old impact structure. Namely, you can find "shatter cones" (see below) -- areas in the rock that surrounded the impact crater that were suddenly and catastrophically fractured by the pressure wave released during the impact. The shatter cones around Sudbury vary from only a few centimeters to half a meter long (at least where we saw them). One cool feature is the sharp part of the cone points back towards the location of the impact (once you rotate the rocks to their original orientation). These shatter cones are some of the most important structures to support the hypothesis that the Sudbury rocks are formed from a massive impact.

Shatter cones found in the rocks surrounding the Sudbury impact structure. I've added some lines to help see the cones in this image.

Erik Klemetti The shatter cones are cool, but what I was most interested in seeing was one of the most astonishing products of the impact: magma and volcanoes. Now, most impacts aren't going to produce much in the way of magma (melt). We do find small blebs of melt in the deposits from other impacts, but by volume, they are an insignificant part of the impact. However, at Sudbury, it seems that the force of the eruption was enough to create hundreds of cubic kilometers (if not more) of magma. Most of this magma stayed in the ground and formed what we call a large igneous intrusion. These features, like the Stillwater Complex in Montana, are one of the few times we see direct evidence of that "magma chamber" that is (incorrectly) envisioned beneath a volcano. The magma body caused by the Sudbury impact was large enough to stay hot for sufficient time to allow minerals to crystallize and separate (fractionate) in the chamber. That's a little bit more into the gory details that I want to get, but one of the ramifications of all this melted crust is that you suddenly had volcanoes where there weren't any mere moments before the impact!

Impact melt in the Sudbury Basin. You can see lighter grey chunks of the shattered crust into which the dark black impact melt/magma intruded. Click to see a larger version.

Erik Klemetti Most of the evidence of these volcanoes has been eroded away in the intervening 1.79 billion years, but we can still find some features that betray the presence of these impact-induced magmas and their volcanic products. First are places where magma squeezed into the now-shattered crust. In these areas, you might get a dark black impact melt (see above and below). At the time it formed, it would have been glassy, but now it is finely crystalline (volcanic glass breaks down quickly). This magma is the molten remains of the crust that sat under the impact site. Now, it didn't melt due to the heat of impact (at least not entirely), but rather thanks to the rapid decrease in pressure it felt after the shockwave of the impact passed. We know that this magma formed during impact because we find it associated with rocks shattered during the impact -- we also know it had to be formed by melting the crust because isotopically, the impact melt is the same as what the crust is isotopically (rather than the mantle or the asteroid). The fact that the impact melt is found in dikes all over the Sudbury Basin means it was likely migrating to the surface and that likely means we can active volcanoes formed from this melt.

A dike of impact melt (dark black) cutting through the crust near the Sudbury impact site. Notice the small chunks of crust in the dark impact melt: evidence for melting the crust. Click to see a larger version.

Erik Klemetti Now, as I said, much of the evidence of the impact volcanism has been erased by erosion. However, there are some very strange rocks that could be best described as "astroclastic". What do I mean by that? Remember, "pyroclastic" rocks are generated from a fluidized flow of how volcanic debris and rocks during an explosive eruption. In the Sudbury area, we find "impact breccia" (a term for broken debris with a finer material) that consists of blocks of crust, blobs of impact melt and even accretionary lapilli (raindrops coated with ash) that formed as the initial explosion caused by the impact fell back into the crater. The composition of the "astroclastic" material (see below) really does sound like a true hybrid between impact fallout and volcanic eruptions.

The impact breccia ("astroclastic") material from the Sudbury impact, with chunks of crust, pieces of impact melt and ash. The deposit itself looks remarkably like a volcanic pyroclastic flow deposit. The piece is roughly 30 cm across. Click to see a larger version.

Erik Klemetti The Sudbury impact structure and the resulting magmatic intrusions (and volcanism) is a one-of-a-kind deposit on Earth. If you're a geologist or geology enthusiast, it is definitely worth taking the trek up to Ontario to see it. There is even an incredibly in-depth (and free) field guide to the area with road stops to see some of these same features. Geologists have tried to attribute any number of grand events to the Sudbury impact, everything from the oxygenation of the oceans to the reworking of all the Earth's crust. Even without these grand claims, anyplace where you can see volcanoes potentially formed by a massive asteroid impact, it is a place you have to go.