We have ignition: Scientists at the National Ignition Facility reach a major milestone in the quest for fusion energy. 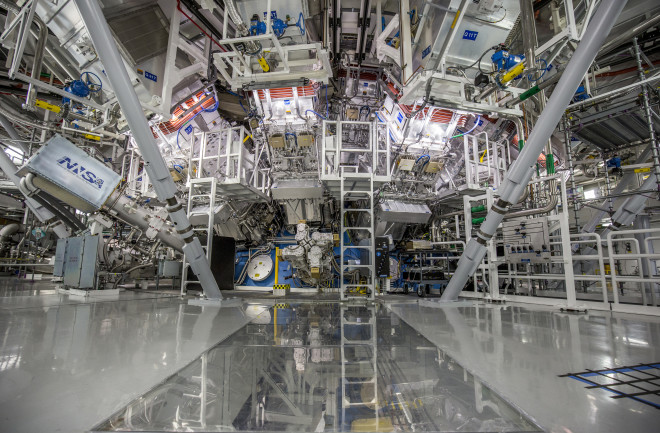 On Dec. 13, 2022, the U.S. Department of Energy announced that scientists at the Lawrence Livermore National Laboratory’s National Ignition Facility (NIF) had made a major breakthrough in the pursuit of fusion energy. A team at NIF conducted the first controlled fusion experiment that produced more energy from fusion than the laser energy used to drive it, a condition known as ignition.

The team focused 2.05 megajoules of laser light onto a piece of fuel the size of a peppercorn. This resulted in an explosion producing 3.15 megajoules. That’s a small energy gain but a massive step in the field.

“This demonstrates it can be done,” U.S. Secretary of Energy Jennifer Granholm said at a press conference announcing the achievement. Granholm added that, with this threshold crossed, scientists can now start working on more efficient lasers, better containment and other details needed to take this to a commercial scale.

(Credit: Lawrence Livermore National Laboratory) To create fusion ignition, the National Ignition Facility’s laser energy is converted into X-rays inside the hohlraum, which then compress a fuel capsule until it implodes, creating a high temperature, high pressure plasma.

President Biden says he wants to see a commercial fusion reactor within a decade. Getting there is still a challenge, but today’s announcement makes it look far more realistic than ever.

While we celebrate these results and wait for more good news, here are five things you need to know about nuclear fusion:

News reports about progress in fusion energy have been sporadic and often overblown, leading some to completely discount the potential of fusion energy. Yet scientists have been steadily progressing toward what is often called “the holy grail” of energy. As today’s announcement shows, they’re getting closer to that goal. There are some very real hurdles left, but fusion energy is not science fiction, nor is it some kind of futurist’s fantasy. It’s a real technology, and as we learned today, it’s achievable.

Unlike nuclear fission, the process that powers today’s nuclear power plants, fusion energy poses no risk of out-of-control chain reactions and meltdowns, like the disaster in Chernobyl in 1986. Fusion also produces far less radioactivity and hazardous waste and does not produce greenhouse gasses. The primary by-product of fusion is helium — an inert, non-toxic gas.

3. Fusion is very, very difficult to pull off.

The science of fusion energy is far from simple but well understood. What makes fusion energy so elusive are the difficulties in engineering a device that can produce it. Making a fusion reactor is like creating — and containing — a tiny star on Earth. To achieve conditions where fusion energy will be created, scientists generate extremely hot plasmas — ionized gasses. At these temperatures, ions that would normally be repelled from each other smash into one another and fuse. When this happens, energy is released. Scientists control the monstrously hot plasma by means of lasers or magnetic fields. It’s a complex and massive engineering feat.

4. Fusion really could be a game-changer.

Energy from nuclear fusion would be safe, clean, carbon-free and almost limitless. It’s hard to overstate how much this would impact every aspect of life on Earth. If everyone seems pretty excited about these advances, that’s why.

This is indeed a huge step, but we’re not there yet. To be commercially viable, a fusion plant would have to produce in one-tenth of a second the amount of energy produced in one day at NIF. What these latest results tell us is that it can be done. Investments of time, money and expertise can pay off in a big way.

“The National Academy last year said we should aim for first fusion electricity between 2035 and 2040. I think that is hard but a worthy target," says Steven Cowley, director of the Princeton Plasma Physics Laboratory.

Although it won’t happen tomorrow, a future powered by safe, clean fusion energy looks much closer today than it did yesterday.