From deathly poisons to delicious recipes, this crop of books covers a range of fascinating science. 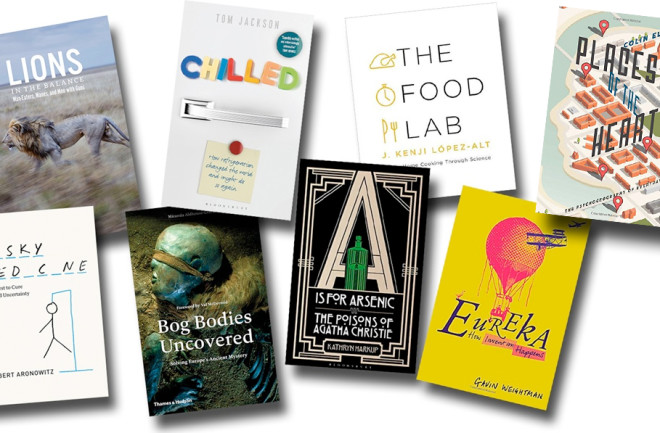 A is for Arsenic: The Poisons of Agatha Christie By Kathryn Harkup

When it came to offing her characters, iconic crime novelist Christie preferred poison. Chemist Harkup delves deep into the history and science behind more than a dozen lethal substances, introducing each through its appearance in Christie’s writing. You don’t have to be familiar with the likes of Miss Marple or Hercule Poirot, however, to enjoy Harkup’s detailed, near-gleeful dip into what she calls Christie’s “deadly dispensary.”

Places of the Heart: The Psychogeography of Everyday LifeBy Colin Ellard

Despite the title, neuroscientist Ellard is decidedly unromantic about deconstructing both natural and human-made environments into components that trigger specific cognitive responses. From Neolithic monuments that awe to “playground casinos” that empty wallets, Ellard argues that a scientific understanding of how our surroundings affect us must be the foundation on which we build the cities and homes of tomorrow.

Risky Medicine: Our Quest to Cure Fear and Uncertainty

Americans have the most advanced (and expensive) health care — but not the best health. Science and sociology historian Aronowitz suggests that our market-driven, risk management-focused health care culture has led to excessive tests and overdiagnosis. The cure? Reforming how we think about health and how it’s practiced.

Before (and after) the light bulb moment, when an idea becomes an innovation, there’s plenty of failure, doubt and competition. Historian Weightman covers the setbacks and the successes in five case studies, from the Wright brothers’ flying machine to the ubiquitous barcode.

Whether you want to make a foolproof Hollandaise or stop fretting about how often to flip your burger, James Beard Award-nominated columnist Lopez-Alt serves up nearly a thousand pages of practical advice and information with a side of snark.

Chilled: How Refrigeration Changed the World and Might Do So AgainBy Tom Jackson

Jackson’s chronicle of cool will give you new appreciation for the (relatively) recent and now indispensable invention. Without mastering the big chill, we’d still be looking for the Higgs boson, and National Ice Cream Day would be very sad, indeed.

Lions in the Balance: Man-Eaters, Manes, and Men With GunsBy Craig Packer

Researcher Packer returns more than a decade after his memoir, Into Africa, with a fast-paced, unsentimental sequel about the kings of the savannah and the politics of protecting them.