American astronauts haven’t launched from U.S. soil since 2011, and they’ve never ventured to space aboard a privately built rocket. That’s about to change. 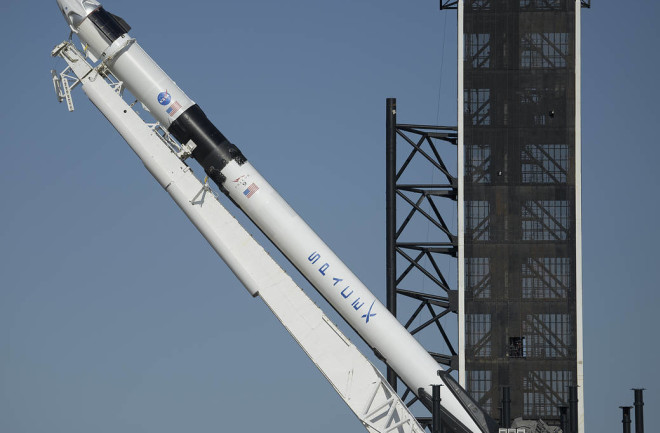 On Wednesday, an American-built rocket will blast American astronauts from American soil for the first time in nearly a decade. SpaceX’s Crew Dragon will lift off for the International Space Station (ISS) from launchpad 39A at Florida’s Kennedy Space Center at about 4:33 p.m. EDT.

Since the end of the Space Shuttle Program in 2011, American astronauts have hitched rides to space aboard Russian Soyuz rockets, costing NASA billions of dollars as the agency waited for private spaceflight companies to finish their crew transportation vehicles. With this launch, as well as upcoming launches from Boeing, NASA hopes to pioneer a reliable and cost-effective way to transport American astronauts — as well as international partners — to the ISS.

The event, called Launch America, will be unprecedented in many ways, from the use of SpaceX’s new technology to the goals of the mission itself.

You can watch the NASA TV stream below.

Adding to the excitement for this historic launch is the new equipment the astronauts are taking with them to the ISS. Before this current age of private aerospace companies was NASA’s Space Shuttle Program and, before that, the Apollo era.

The first space shuttle, which was supposed to be the successor to the Apollo program of the 1960s and 1970s, launched in 1981 and saw a number of successful flights. It, however, saw the devastation of the Columbia and Challenger accidents, in which a total of 14 crew members lost their lives. In 2011, when NASA retired the final shuttle, they were already looking toward working with private companies to make the next generation of spacecraft.

SpaceX has designed the Crew Dragon space capsule and Falcon 9 rocket to be used for Wednesday’s launch. The company, which Elon Musk launched in 2002, has continued to build and develop rockets over the past 18 years; but it was when they partnered with NASA that the dream of sending astronauts to space ramped up. With the partnership, NASA has been able to dedicate more funding toward science and research of the cosmos, while staying focused on the agency’s mission to have a bigger human presence in space and eventually return to the moon within the decade.

Since 2012, SpaceX has successfully used their space capsule, Cargo Dragon, and Falcon 9 rockets to resupply the ISS. The Cargo Dragon looks much like the Crew Dragon, minus the interior set up for astronauts. During the 20 missions to the ISS, SpaceX has flown multiple tons of cargo, as well as delivering important experiments that will help NASA prepare for longer spaceflights in the future.

The interior of the Crew Dragon. (Credit: SpaceX/Flickr)

The inside of the Crew Dragon is a product of the 21st century. The sleek white interior with black accents is reminiscent of futuristic spacecraft from science fiction. The astronauts also have their own touch-screen monitors, almost identical to the monitors inside the vehicles made by SpaceX’s sister company, Tesla. These monitors help the astronauts control the mechanics of the spacecraft and navigate their way to the ISS.

In order to operate this capsule, the astronauts have been training for years on how to navigate their way into low Earth orbit.

This April, the astronauts were able to climb inside their Crew Dragon capsule and run through procedures including making sure their spacesuits wouldn’t leak during the flight and checking the display monitors. Their suits are specially designed for the capsule, mirroring the black-and-white theme of the interior.

SpaceX has had to prove that their capsule design was safe. The road to this upcoming launch wasn’t easy, as the company was set behind after a capsule exploded during a test in April 2019. Since then, SpaceX has investigated the incident, finding a leak and a faulty valve to have been the cause. Since then, the company passed all their tests ahead of this crewed mission.

Astronauts Douglas Hurley and Robert Behnken were selected in 2015 for this special mission. Both have completed two spaceflights in the past and have been training to use the SpaceX Crew Dragon for this mission for the past five years.

Robert Behnken during a test run of the Crew Dragon ahead of the launch. (Credit: SpaceX/Ashish Sharma)

Behnken’s history with NASA nearly mirrors Hurley’s. Also becoming an astronaut in 2000, Behnken visited the ISS twice on two different space shuttle missions in 2008 and 2010, both aboard Endeavour.

During the Crew Dragon mission, Hurley will handle the launch, landing and recovery, while Behnken will be responsible for rendezvousing with the ISS, as well as overseeing autonomously docking and undocking procedures with the space station.

After launch, it will take the capsule a little over 24 hours to reach the ISS. SpaceX designed the Crew Dragon to dock autonomously to the station without the aid of the astronauts, but the crew already on the ISS will also be aiding in the process in case something goes wrong.

During their time in space, the astronauts will become a part of Expedition 63, the current mission with crew already stationed on the ISS. They’ll also be responsible for conducting tests on the Crew Dragon and performing other experiments.

Behnken and Hurley don’t have a set return date to Earth, though. The duration of the mission will be determined once the two reach the ISS, based on when NASA and their private partners can launch again.

Once their mission ends, whenever that may be, the capsule will bring back a significant Apollo-era moment — the splashdown. Once the mission is over, the Crew Dragon will undock from the ISS and begin the trip back to Earth. The capsule will begin burning up as it soars through Earth’s atmosphere, though the capsule is built to sustain that pressure and heat. Once it gets closer to Earth, a collection of parachutes will deploy, bringing Hurley and Behnken to Earth safely.

The splashdown was a welcomed moment during the Apollo era, as it marked the safe return of the astronauts. The space shuttle landed like a plane on a runway.

SpaceX isn’t the only private player in America’s spacefaring ventures. Boeing is also on track to launch astronauts into space soon, but first they have to pass one more test; successfully docking an uncrewed capsule with the ISS. Once that’s complete, Boeing will be beside SpaceX, launching American astronauts and their international partners once again.

So, although NASA hopes to finally end the nearly 10-year drought in crewed U.S. spaceflights this week, astronauts within the next year could have two potential carriers. And one thing that often comes along with competition is innovation. So stay tuned, because the private space race is ramping up.