What Is the Fate of Volcanic Pumice Rafts? 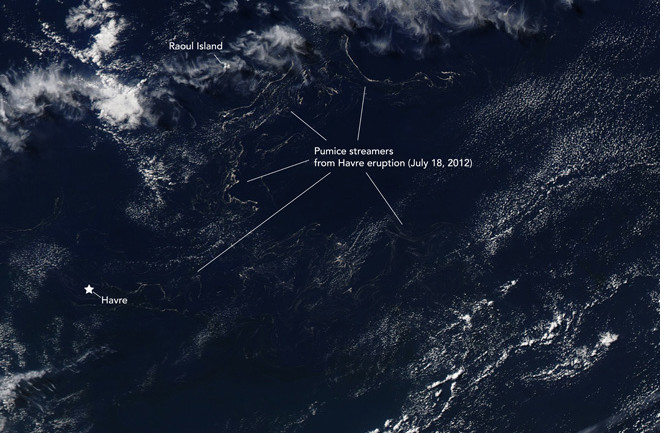 The streamers of pumice (likely each less than a few kilometers across) from the July 18, 2012 eruption of Havre seamount spreading across the Pacific Ocean. The pumice has spread over an area of over 250,00 square kilometers in a little over one month. Image taken August 19, 2012, courtesy of NASA and R. Simmon. The NASA Earth Observatory has been doing an excellent job tracking the spread of the pumice from the Havre eruption in the Kermadec Islands. Currently the pumice is spread over an area of 270,000 km^2 / 100,000 sq. miles of the Pacific Ocean and is continuing to spread (see above). This pumice will likely stay afloat for months if not longer and eventually make landfall wherever the currents dictate - potentially as far off as South America. Pumice rafts are not particularly uncommon (see map below), especially in areas of abundant submarine volcanism like the southwestern Pacific Ocean, and they can be fascinating on levels even beyond the volcanology and petrology of the eruption itself. The pumice rafts are like islands that move around the oceans (without the problems of messing with the Orchid station), so you might expect that oceanic organisms will take advantage of their newly created pieces of real estate.

A map showing the location and drift direction of significant pumice raft events over the last 200 years. Figure 1 from Bryan and others (2012). We don't know what the fate of the Havre pumice right now, but a recent study in PLoS One (open access) by Scott Bryan and others details what happened to pumice from the 2006 Home Reef eruption in Tonga. Home Reef is a submarine caldera that has a history of eruptions that produce subaerial ash plumes and ephemeral islands made of pyroclastic material like pumice. The 2006 eruption was a VEI 2 eruption where the main vent was likely tens of meters below the ocean surface -- however, the eruption was strong enough to create an ash plume that likely reached as high as 15 km / 50,000 feet (at its maximum). This eruption did, indeed, produce a small island that might have been as high as 75 meters tall, but wave action quickly destroyed the "island" of fragmental volcanic material into a pumice raft. This is where the journey began for the pumice. Now, pumice is unique amongst rocks as it can float in water due to the presence of abundant and isolated bubbles in the volcanic material, thus reducing the density of the coast (and adding buoyancy by keeping the air bubbles isolated from the water). So, these floating clasts started as sterile chunks of volcanic material drifting on the high seas, but over the course of the ensuing months and years, the pumice spread across the ocean basin. In fact, within 8 months of the eruption, some of these pumice clasts travelled over 5,000 km / 3,100 miles and many stayed afloat for almost two years after the initial Home Reef eruption. So, much like what is happening right now with the Havre pumice raft (see top), the Home Reef pumice spread across the ocean surface. Estimates by Bryan and others (2012) of the number of pumice clasts from the Home Reef raft, a puny 0.16 km^3 eruption, is greater than 2.5 trillion pieces of pumice. Suddenly, you have a massive multitude of potential centimeter-scale island homes for marine creatures! Not only does the pumice create great new home, but they are on the go, so when a critter decides to take up residence on a pumice (as Bryan and others call it -- "fouling the pumice"), they go where the pumice goes. For the Home Reef eruption, the pumice quickly became home to upwards of 80 different species of marine life (see below) over the course of its journey -- in some cases, single pumice clasts were home to over 200 individuals of a single species of barnacle (this means that over 10 billion barnacles colonized the pumice raft). Some of these critters were permanent inhabitants (that is, they were attached) while others were mobile, so if the pumice landed on a beach, off onto the island a crab might scuttle. By a year and a half after the pumice raft was erupted, some clasts had 3/4 of their surface covered. In could reach such an extreme that the biological hitchhikers would cause the pumice to sink or preferential float with one side facing up, creating microenvironments on a single pumice clast!

A "heavily fouled" pumice from the 2006 eruption of Home Reef, collected over 800 days after the eruption in Queensland, Australia. Taken from Figure 4 of Bryan and others (2012). One of the most fascinating suggestions by Bryan and others (2012) is that volcanic pumice rafts might be one of the ways that the ocean can redistribute organisms. Upwards of 1/3 of Home Reef pumice made the journey from Tonga to the Great Barrier Reef region off of Australia in only 7 months after the eruption. This means that the sealife attached to the pumice was brought to the reef, some ready to spawn and create new colonies of barnacles, corals, bryozoans and more. Other creatures were stranded on islands inbetween or sank before reaching the Great Barrier Reef and Australia, but still, organisms that usually can't make such a journey were able to do so (and relatively speedily). So, these volcanic events that have happened frequently in the recent geologic record all over the world may play an important role in how life colonized different parts of the world's oceans. Reference Bryan SE, Cook AG, Evans JP, Hebden K, Hurrey L, et al. (2012) Rapid, Long-Distance Dispersal by Pumice Rafting. PLoS ONE 7(7): e40583. doi:10.1371/journal.pone.0040583