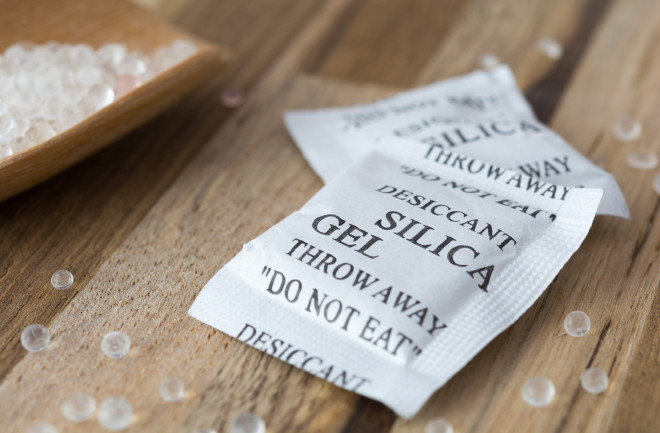 Within shoeboxes, beef jerky bags and TV bubble wrap, lie tiny white packets stamped with a very clear "DO NOT EAT" warning. These are silica gel packets, a solution for people everywhere looking to keep their products at perfect humidity levels.

The packets hold up to 40 percent of their weight in moisture, thanks to the accommodating chemical structure of the silicon dioxide molecules inside. And though the packets might be the way we interact with silica gel the most, the material sneaks its way into a range of products you might never see, let alone have delivered to your doorstep.

Technically, silica gel packets are desiccants — the broader category of materials that suck up moisture. Bentonite clay, which comes from volcanic ash, and other chemical formulas, like calcium chloride, also end up in similar places as silica gel packets, for the same purpose: to keep water away from products that really shouldn’t get damp. Though they appear well-protected, electronics aren’t moisture-proof. Water in the air seeps between seams in casings and can absorb through the plastic directly. Humidity creeps into food packaging, too, and ruins the crunch or chewiness of a snack while encouraging mold growth.

Silica gel packets work by taking in moisture when there’s too much and, if the air gets too dry, releasing some of the water they've already absorbed. The gel itself is basically a mix of water and silica, the main component of sand. Together, the ingredients create pellets that, when examined closely, are made of molecular nets and have almost spongelike structure. All the tiny gaps among and between these molecules are what allows the gel to hold onto water so well.

Water from moist air condenses onto the solid parts of silica gel. The droplets accumulate and slowly build up enough to make contact with growing moisture deposits on nearby gel molecules. Eventually, the two merge. Sabine Leroch and Martin Wendland, both engineers at the University of Natural Resources and Life Sciences, Vienna, describe the process in a 2013 paper: “Liquid water forms bridges in the cavities separating the particles.” The water molecules hold onto each other and the silica gel tightly, while filling up the internal structure of each pellet in a packet — making each pouch feel dry even when relatively saturated.

Since silica gel holds onto water that condensed onto its chemical structure, it’s possible to reverse the process. Heat is strong enough to break the relatively weak bonds between the silica gel and water, and lets moisture evaporate out. That’s why a team of engineers at the Technical University of Denmark investigated whether or not electronics can provide enough heat to dry out desiccants inside their plastic casings. If these moisture-sucking additives do their job while the devices are off, then maybe the heat the technology generates while powered on can remove the moisture the desiccants soaked up and keep them working for longer, the team reasoned. Silica gels might not respond best to heat from an electronic device, they found, but other desiccants might pull this trick off.

Researchers are constantly experimenting with silica gel packets and other desiccants to see what the materials can accomplish. A team of microbiologists, for example, tucked samples of the Streptococcus pneumoniae bacteria into individual packets and found that silica gel did a good job of keeping the potential pathogen alive during transit between labs. Researchers are happy to rework the silica format, too. For scenarios where manufacturers need thinner or more dispersed water-removal technology, engineers developed thin sheets and powdered versions of silica gel. Aerogels — silica variants that are a kind of solid foam — make for good insulation in boots and on a Mars rover.

Despite silica gel's versatility, one way not to use the material is as a snack. Truthfully, silica gel is nontoxic. If someone swallowed a packet, the contents inside likely won’t cause illness. The biggest issue, according to the Illinois Poison Center, is choking on the packet itself. Children might be the most likely to think these packets are part of the food, but individuals with dementia sometimes also struggle to discern what should or shouldn’t be eaten. And for some other desiccants that are more harmful, this can be an issue — there’s at least one recorded instance of an individual with dementia consuming a desiccant called calcium oxide and chemically burning their mouth. Since there can be confusion sometimes over what exactly is in the packet, the Arizona Poison and Drug Information Center recommends calling poison control if someone swallows a desiccant packet, just in case.