Not all hazardous substances carry a warning label. Here are four toxins found in common foods that can pose a serious health risk. 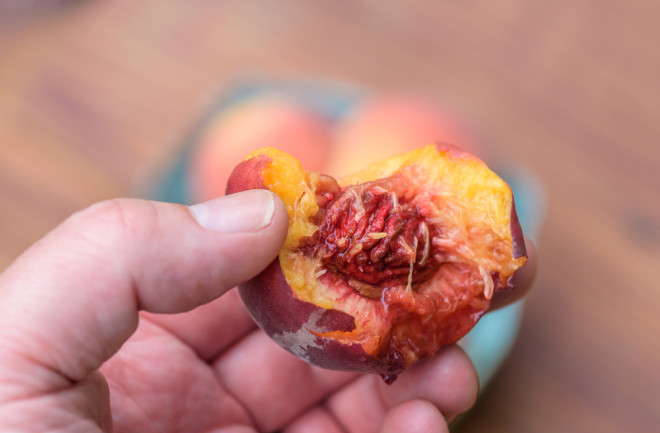 Labeling substances as poisonous has a spotty history. Well into the 1800s, many known poisons were available for retail sale, which meant that organizations like the American Medical Association wanted bottles clearly marked.

Symbols of skulls and crossbones appeared on some, but not all, of these bottles; warning labels didn’t become consistent until the 1960s. Dangerous substances, particularly ones that children can easily access, are now subject to a variety of packaging and labeling regulations.

But not all toxic substances come in a bottle. While claims of "toxic" food items aren't always supported by science, some substances found in everyday foods or ingredients can be damaging or even deadly. Here are four common toxins found in your fridge or pantry that have serious poison potential — particularly when consumed in large amounts — and when to avoid them.

The seeds and mace of the nutmeg plant, which is known to contain myristicin. (Credit: Embong Salampessy/Shutterstock)

Myristicin is a chemical compound that can spark hallucinations, delirium and feelings of euphoria. In large quantities, it can cause neurological damage and be fatal. Myristicin is found in black pepper, carrots, celery, dill and parsnips.  Nutmeg also has, as one study put it, “volatile oils” that contain myristicin.

The first documented case of someone buzzing on nutmeg comes from 1576 when an English woman took 10-12 nutmegs with the intent of getting high.  Nutmeg has long been a substitute for other drugs, and there’s also a documented history of users experiencing brain damage or death.

Fortunately, nutmeg abuse isn’t common. Poison control for the state of Texas, for example, reported only 17 calls for nutmeg poisoning between 1998 and 2008. About 65 percent of these calls were due to intentional ingestion, and most of these users were adolescent males.

Five grams of nutmeg containing one to two milligrams of myristicin content is the minimum dosage needed to elicit hallucinations. Nutmeg, however, should not be a contender for the next TikTok challenge. People under the influence have reported a miserable experience.  Instead of euphoria and hallucinations, people have described feeling severely anxious. They may even experience a sense of dread and terrible hallucinations that make “Pink Elephants on Parade” from Dumbo seem like a mild fever dream.

Another reason to avoid an overdose — there is no clinical data to help clinicians provide treatment. They can only address symptoms, like nausea and vomiting, which can last for an agonizing 72 hours.

For some people, mangos need a warning label. Mango skin, as well as the tree leaves and bark, contain urushiol, a toxin that can cause contact dermatitis. Urushiol is also found in poison oak and poison ivy.

In one case study, a patient presented in the ER after touching and eating mangos two days earlier. The patient had a history of irritation from poison ivy, which helped the physicians identify the urushiol as the culprit. The man had an intense rash on “all extremities,” and only his palms, soles of his feet, and lips were spared. Treatment was antihistamines and steroids and he recovered in several days.

The urushiol in mangos can also cause an allergic reaction when consumed. Depending on a person’s sensitivity, one bite can cause anaphylaxis or pulmonary edema.  Urushiol is also found in raw cashews, which is why these nuts are steamed prior to sale.

Lectins are a defense mechanism for plants because they are very hard for humans to digest. They are seen in a variety of foods including beans, carrots, cherries, corn, garlic, lentils, peanuts, peas, potatoes and soybeans.

Lectins are proteins that bind to carbohydrates. If foods like beans are soaked and then heated thoroughly, the lectin content lessens and the food is safe to eat.  Red kidney beans have a high lectin content, and eating a raw handful can lead to a painful reaction. People have reported experiencing nausea, gas, bloating, vomiting and diarrhea.

In the long term, continuous lectin ingestion can cause serious issues. Lectin interferes with nutrient absorption, and it also disrupts needed bacteria in the digestive tract. In extreme cases, lectin can cause organ damage.

Cyanogenic glycosides are a plant’s way of protecting itself from predators, and there are more than 2,600 species of plants that contain cyanide, a deadly poison.

Cyanide is found in many foods kept in pantries and fridges, including almonds, apple seeds, apricot pits, bamboo shoots, cherry pits and lima beans. All of these items, however, have low quantities of cyanide, and a person would intentionally have to eat significant amounts to feel the effects.  For apples, a person would have to pick out 200 seeds from the core and then ingest them, which is the equivalent of eating 40 cores in one sitting.

Apple juice is also safe for people to drink. One study tested the cyanide content of more than a dozen apple juice brands and found the levels were so low they were not a health hazard. The study’s authors, however, recommended that people pressing apples to make juice remove the seeds just to be on the safe side.